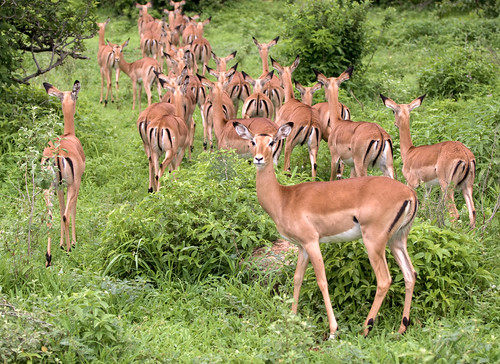 Roaming the savannas and light woodlands of Africa, Impalas are herbivores that feed on a variety of vegetation, including grass, ferns, leaves, acacia pods, and fruits. During the wet season, they graze and browse for food, while in the dry season they rely more heavily on the pods and fruits of the acacia trees.

Male Impalas are the guardians of their herd, and they take their role seriously. When they sense danger, they let out a loud, raspy bark to alert the other members of the herd. This bark is a warning to the herd to be on the lookout for potential danger, and it is a sound that is unmistakable and unmistakably Impala.

Impalas are a species of antelope with a distinct reddish-brown coat and a black line running along their lower back to the tail. They have a unique feature in the form of large tufts of black hair that cover a scent gland located above the heel on each hind leg. This scent gland is used to mark their territory and to communicate with other impalas.

Also → Herd of Rams is an impressive sight to behold

4. The Impala: A Graceful and Powerful Animal

The Impala is a graceful and powerful animal, weighing anywhere from 100 to 167 pounds and standing 28 to 36 inches tall. Its muscular body and long legs make it an impressive sight, and its agility and speed make it a formidable opponent. It is the only antelope that can leap over 10 feet in the air and can reach speeds of up to 60 miles per hour. Its impressive physical abilities make it a popular animal to observe in the wild.

Impalas are a unique species of antelope, as they are both diurnal and nocturnal, meaning they are active during both the day and night. However, they are mainly active during the day, when they can be seen grazing on grasses and browsing on leaves in the African savanna. During the night, they tend to rest in thickets or near water sources, where they can find shelter from predators.

6. Female Despite No Horns

Female impalas may look similar to their male counterparts, but they lack the impressive horns that males possess. Male impalas use their horns for defense, and they can range from 18â to 37â in length. While the females may not have horns, they still have a number of other impressive physical features, such as their sleek coats and powerful hind legs.

7. A herd of impalas is a sight to behold!

A herd of impalas is a sight to behold! These majestic creatures have a lifespan of around 12 years, and can often be seen grazing in large groups in the African savannah. They are a social species, and their herds can range in size from a few individuals to hundreds. Impalas are a keystone species in the African ecosystem, and their presence is essential for maintaining the balance of the savannah.

When it comes to mating, male Impalas make a unique sound that is a combination of a dog's bark and a lion's roar. This sound is often described as a loud, deep, and guttural noise that can be heard from a great distance. It is believed that this sound is used to attract potential mates and to ward off other males from the same area.

Also → Frogs Use Sound to Communicate

9. Impalas are one of the fastest animals on the African savanna

Impalas are a species of antelope native to Africa, and their gestation period is between 6 and 7 months. The males are known as bucks, the females as does, and their young are called calves. Impalas are known for their impressive leaping ability, and can jump up to 10 feet in the air and cover distances of up to 30 feet in a single bound. They are also able to reach speeds of up to 60 miles per hour, making them one of the fastest animals on the African savanna.

During the mating season, male Impalas form harems with multiple females, and each female typically gives birth to a single calf. This is an interesting behavior, as it allows the males to increase their chances of successful mating and the females to ensure that their offspring receive the necessary care and protection.


Are members of the antelope family and have long faces, long black horns and a short tail with beard


Are part of the equidae family that includes donkeys and horses.

Short about Impalas
Are medium-sized African antelopes that can leap to a height of 10 feet or 33 feet ahead when running.