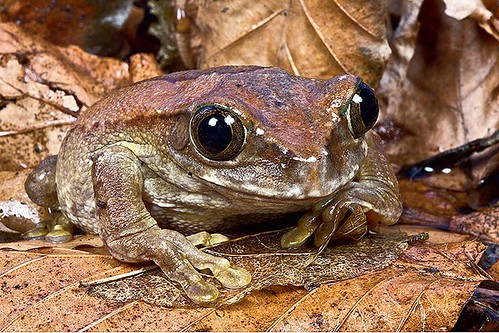 Frogs are an incredibly diverse species, belonging to the order Anura and inhabiting a wide range of habitats. From the highest mountains to the driest deserts, and from lush forests to sprawling savannas, frogs can be found in almost any environment. They are a vital part of the ecosystem, playing an important role in the food chain and helping to keep insect populations in check.


2. The Goliath frog is the largest living frog species in the world

The Goliath frog is the largest living species of frog in the world, measuring up to 13 inches in length and weighing an impressive 8 pounds. This gargantuan amphibian is native to Cameroon and Equatorial Guinea, where it inhabits fast-flowing streams and rivers. It is an endangered species due to habitat destruction and over-collection for the pet trade.

Also → Storks are the ultimate predators

3. Frogs Use Sound to Communicate

Frogs are fascinating creatures, with each species having its own unique call. To make these vocalizations, they force air through their larynx, and males use this to their advantage by singing in loud choruses to both warn other males and attract females. This is a fascinating behavior that has been observed in many species of frogs, and it's a great example of how animals use sound to communicate.

4. Frogs Have a Unique Feature on Either Side of Their Head - a Tympanum

Frogs have a unique feature on either side of their head - a large, visible ear drum known as a tympanum. This tympanum is responsible for transmitting sound waves to the inner ear, while also protecting it from water and debris. This is a crucial adaptation for frogs, as it allows them to detect potential predators and prey, as well as communicate with other frogs.

Frogs undergo a fascinating process known as metamorphosis, which involves a dramatic transformation from egg to larva to adult. This process begins when the female frog lays her eggs in water, which then hatch into tadpoles. As the tadpoles grow, they develop legs and lungs, eventually emerging from the water as adult frogs. This transformation is an incredible example of the power of nature and the adaptability of frogs.

Also → Frogger: How to Survive a Classic Arcade Game

Frogs are voracious predators, feasting on a wide variety of insects and other invertebrates such as mice, bats, worms, snakes, and even small birds. Their diet is highly varied, and they have been known to consume anything from beetles and grasshoppers to spiders and snails. They also have a taste for amphibians, such as salamanders and newts, as well as fish, crustaceans, and even other frogs. With their powerful tongues and sticky saliva, frogs are able to capture and consume prey of all sizes.

7. The Strangest Creatures in the World

Frogs are remarkable creatures, capable of launching themselves into the air with their powerful back legs. This strength allows them to climb, swim, and even glide through the air with ease. Their legs are specially adapted for these activities, with webbed feet that help them to propel themselves through the water and long, muscular thighs that give them the power to leap into the air.


8. Frogs have an incredible ability to see in all directions

Frogs have an incredible ability to see in all directions, thanks to their bulging eyes that appear to stare blankly. Not only can they see in all directions, but they can also retract their eyes into their mouths, giving them an even wider range of vision. This unique feature of frogs allows them to spot potential predators and prey from any angle.

Also → Platypuses: A Unique Creature With a Duck-Like Bill and Webbed Feet

Frogs have an incredible adaptation that helps them survive in both aquatic and terrestrial environments: a third eyelid. This specialized membrane, known as the nictitating membrane, is transparent and can be drawn across the eye to protect it from debris and other irritants while underwater. On land, the membrane helps keep the frog's eyes moist and lubricated. This remarkable adaptation allows frogs to thrive in a variety of habitats.

10. Frogs Catch Their Prey with Their Sticky Tongues

Frogs have an incredibly unique way of catching their prey - they use their sticky tongues like fly fishing! Not only that, but they don't drink water the way we do - instead, their bodies absorb water through their skin. This is an adaptation that helps them survive in their wetland habitats, and it's just one of the many fascinating things about frogs.

Short about Frogs
Are amphibians with a large head, large eyes and smooth moist skin.