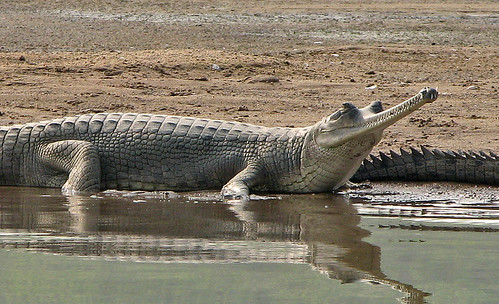 1. A Species Well-Adapted to Life in the Water

Gharials, a species of crocodilian native to India and Nepal, are well-adapted to life in the water, spending most of their time there due to their short legs. This makes it difficult for them to spend long periods of time on land, so they tend to stay in the water where they can move more easily. They have long, slender snouts and webbed feet, which help them to swim quickly and efficiently. Gharials are also able to hold their breath for up to two hours, allowing them to stay submerged for extended periods of time.


2. A Species of Crocodilian Found in Riverines

Gharials are a species of crocodilian found in riverines with fast-moving, deep, and clear water. They prefer to inhabit deep still pools at sharp river bends, where they can take advantage of the slower water and the abundance of food. These creatures are well-adapted to their environment, and their long, slender snouts are perfect for catching fish. Gharials are an important part of the riverine ecosystem, and their presence is a sign of a healthy river.

Gharials are an impressive species of reptile, growing up to an impressive 6 meters in length. Their long, slender snout is perfectly adapted for catching fish in the water, with more than 50 sharp teeth lining the inside of their mouths. This makes them incredibly efficient predators, able to quickly and easily catch their prey.

4. The Carnivorous Reptiles of India

Gharials are solitary predators that feed on a variety of small animals, including insects, fish, and aquatic frogs. These carnivorous reptiles have adapted to their environment, using their long, narrow snouts to capture their prey. They are also known to eat carrion, which helps them to survive in their aquatic habitats.


5. An Impressive Species of Crocodilian

Gharials are an impressive species of crocodilian, weighing anywhere from 59 to 181 kg and boasting a snout length that can be up to 3 Â½ to 5 Â½ times as long as it is broad at the base. This long, narrow snout is a defining feature of the species, and is used to catch fish, their primary food source.

Also → Frogs Use Sound to Communicate

6. Gharials have an impressive auditory ability

Gharials, a species of crocodilian native to India and Nepal, have an impressive auditory ability; they can hear in the low frequency or subsonic range. This range is lower than the range of human hearing, and is typically used by animals to detect distant sounds, such as the rumble of thunder or the call of another animal. Gharials have adapted to use this range to detect prey, predators, and other environmental cues. This adaptation has enabled them to survive in their natural habitats for thousands of years.

7. Gharials basking in the sun

Gharials are an interesting species of crocodilian that enjoy basking in the sun to increase their body temperature. This helps them to move around more easily and aids in their digestion. When they are done basking, they rest with their jaws wide open, allowing them to cool down and conserve energy. This behavior is unique to gharials and is an important part of their daily routine.

Also → Red Kangaroos are the Largest Marsupials in the World

Gharials, a species of crocodilian native to India and Nepal, are known to make hissing and buzzing sounds during courtship or to protect their territories. These sounds are made by males to attract females and to ward off other males. The hissing sound is created by the male gharial inflating its throat pouch and vibrating its vocal cords, while the buzzing sound is created by the male rubbing its snout against the ground. These sounds are an important part of the gharial's courtship ritual and territorial behavior.

9. Gharials lay eggs on the sand

During the dry season, female Gharials make their nests and lay between 30 to 50 eggs on the exposed sand of river banks. Taking great care, they then bury the eggs in the sand to protect them from predators and the elements. This is a crucial part of the Gharial's reproductive cycle, as the eggs must remain safe until they hatch.

Also → The American and Chinese Alligators Are Two Distinct Species

During the breeding season, adult male Gharials become territorial and will not tolerate other adult males in their area. However, they are more lenient towards smaller and sub-adult males, allowing them to remain in their territory. This behavior is thought to be a way for the adult males to ensure that they have the best chance of mating with the females in the area.

Short about Gharials
Are large-sized reptiles found in Northern Indian and the surrounding countries.