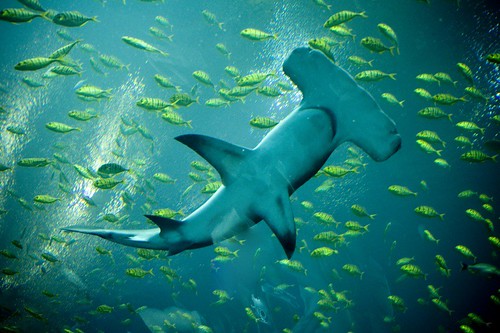 Fact 1
A shark has anywhere from 5 to 15 rows of teeth. These teeth do not have roots. The teeth usually fall out after a week and they are replaced with a row of new teeth within a day.

Fact 2
The skin of a shark is tough and covered by dermal denticles which are basically small plates covered with enamel that is found in teeth.

Fact 3
Sharks can detect the slightest movement in the water with the lateral line system that runs along their sides.

Fact 4
Shark liver is rich in oil. This makes the organ relatively buoyant and is one of the reason for sharks keeping their balance in the water.

Fact 5
Some species of sharks are oviparous which means they lay eggs, while others are viviparous and give birth to live young.

Fact 7
Sharks are not vicious man-eaters though they are predators and some species are considered dangerous to humans. Their sharp teeth can inflict serious wounds which are not fatal.

Fact 8
Sharks are not color blind as is commonly thought. They are in fact attracted to certain colors such as yellow.

Fact 9
The gestation period for a pregnant female shark ranges from 5 months to 2 years.

Fact 10
Sharks eyes are on the sides of their head and their sightline is capable of spanning nearly 360 degrees.


Are cold-blooded aquatic vertebrates that have skins that are covered with scales, a set of gills and two sets of paired fins.


Are flat marine cartilaginous fishes in the phylum Chordate and composing the family Dasyatidae.


Are warm blooded intelligent mammals that have been known to help humans in many circumstances and loved by them.


Are voracious reptiles that are aquatic by nature and belong to the genus Crocodilus meaning âlizards.â

Short about Sharks
Are cartilaginous fish which means that the structure of their animalâs body is formed of cartilage and not bone.