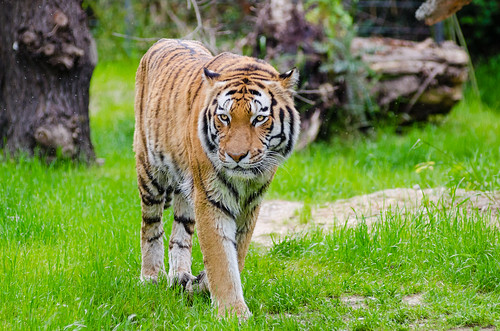 1. How Tigers Mark Their Territory

Tigers are solitary creatures, only coming together to mate or raise their young. However, their territories can overlap with those of female tigers, and they mark their boundaries with urine and secretions from their scent glands. This is done by spraying the scent onto bushes or trees, allowing other tigers to know where their territory begins and ends.


2. Siberian Tigers are the Largest of All Tiger Subspecies

The majestic Siberian Tiger is the largest of all tiger subspecies, with males weighing up to an impressive 225 kg and females typically being smaller at around 180 kg. These powerful animals are native to the Russian Far East, and are the largest of the big cats, making them a sight to behold.

3. Tigers have an incredible night vision

Tigers have an incredible night vision that is six times more powerful than that of humans. Their round pupils and yellow irises act like a mirror, reflecting back ambient light at night, allowing them to see in the dark with remarkable clarity. This adaptation has enabled them to become one of the most successful predators in the animal kingdom.

4. How long can tigers live in the wild?

Tigers are majestic creatures, but their lives are often cut short. In the wild, tigers typically live for 10-15 years, while those held in captivity can live up to 26 years. This is due to the fact that tigers in captivity are provided with better nutrition, veterinary care, and protection from predators and poachers. Despite this, tigers in the wild still face a number of threats, including habitat loss, poaching, and human-tiger conflict.


5. Tigers are powerful and agile predators

Tigers are powerful and agile predators, capable of leaping up to 10 yards or jumping 1.5 meters in the air to catch their unsuspecting prey. Their strong muscles and silent movements allow them to move stealthily and quickly, making them one of the most feared predators in the animal kingdom.

6. Tigers' Incredible Teeth Make Them One of the Most Powerful Predators

Tigers have incredibly powerful teeth, with their canines being up to 10 times larger than the largest tooth in a human mouth. This impressive set of teeth is fully developed within 16 months, and by the time they reach 18 months of age, tigers are already capable of making their own kills. This remarkable ability to hunt and feed themselves is a key factor in their success as one of the most powerful predators in the animal kingdom.

Tigers are powerful predators, capable of consuming up to 100 lbs of meat in a single meal. Not only that, but they are also strong swimmers and can dive underwater in pursuit of their prey. This makes them a formidable hunter, able to traverse both land and water in search of food.


8. " Ferocious Predators of the Wild"

Tigers are formidable predators, with a diet that includes a wide variety of animals. In addition to their usual wild prey, such as deer, tigers will also hunt and consume monkeys, fowls, frogs, tortoises, and even porcupines. These animals provide a valuable source of nutrition for tigers, helping them to stay healthy and strong in the wild.

Tigers are truly remarkable creatures, with a gestation period of around 103 days, during which time the female can give birth to up to an incredible 7 cubs at once! This is an impressive feat, and it's no wonder that tigers are one of the most iconic animals in the world.

Tigers are truly remarkable creatures, with each one having a unique pattern of stripes that sets them apart from any other. On average, a tiger has around 100 stripes, making them easily distinguishable from other big cats. These stripes are not only aesthetically pleasing, but also serve as a form of camouflage, helping tigers to blend in with their natural environment.

Short about Tigers
Have been around for 2 million years but considered an endangered species with only about 4,000 surviving in the wild today.