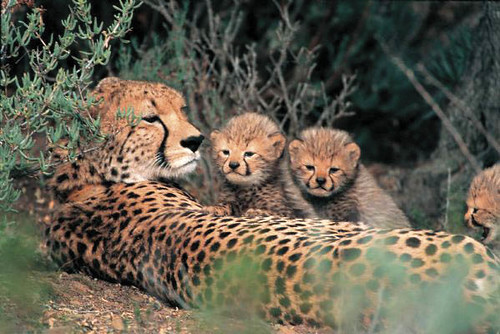 1. Cheetahs rely on their incredible speed to hunt their prey

Cheetahs are the fastest land animals, capable of reaching speeds of up to 75 mph in short bursts. However, they cannot sustain this speed for long periods of time and must rest periodically to regain their strength. As a result, they rely on their incredible speed to hunt their prey in short, rapid bursts, before taking a break to rest and recover.

Cheetahs are remarkable big cats, capable of incredible feats of speed and agility. This is due to their enlarged lungs and hearts, which allow them to take in more oxygen than other cats. This increased oxygen intake enables them to breathe up to 150 times a minute, giving them the energy they need to reach speeds of up to 75 mph.

3. How Cheetahs Use Their Tails to Speed Up

Cheetahs are the fastest land animals, capable of reaching speeds of up to 75 mph. To help them reach such incredible speeds, they use their tails like a rudder on a boat, allowing them to make sharp turns and navigate quickly through their environment. This tail-steering technique helps them to outmaneuver their prey and avoid predators.

4. The Only Big Cats That Can't Roar

Did you know that Cheetahs are the only big cats that can't roar? Instead, they purr, growl, and make chirping bird-like sounds to communicate with each other. This is a lesser-known fact about these majestic animals, but it's an important one to remember!

Cheetahs are the fastest land animals, capable of reaching speeds of up to 75 mph. This incredible speed is made possible by their retractable claws, which give them a strong grip when they are chasing their prey. The claws are also semi-retractable, meaning they are partially exposed even when not in use, allowing the cheetah to maintain traction on the ground and make sharp turns while running. This combination of speed and agility makes the cheetah one of the most successful predators in the animal kingdom.

6. Female cheetahs are known for their promiscuity

Female cheetahs are known for their promiscuity, often mating with multiple males during their estrus cycle. After a three-month gestation period, they give birth to litters of three to five cubs in tall grassy areas or marshy lairs, providing the cubs with a safe and secluded environment to grow and develop.

7. Female Cheetahs Teach Their Cubs How to Survive

Female cheetahs are incredibly devoted to their cubs, teaching them the skills they need to survive in the wild. For the first 18 months of their lives, the cubs stay with their mother, learning how to hunt, hide, and protect themselves. Meanwhile, the males prefer to form small groups of two or three, spending time together and looking out for one another.


8. Cheetahs are the fastest land animals on the planet

Cheetahs are the fastest land animals on the planet, but they have some limitations. They are unable to climb trees, and their vision is not well-suited for night-time activities; they can only see clearly during the day. Despite these drawbacks, cheetahs are still incredibly agile and can reach speeds of up to 75 mph, making them one of the most impressive animals in the world.

Cheetahs have distinctive black "tear lines" that run from the inside of each eye to their mouth, which not only protect their eyes from the sun's glare, but also enable them to spot prey from far away. This adaptation is essential for the cheetah's survival, as it allows them to quickly identify and pursue their prey over long distances.

Cheetahs are the world's fastest land animals, capable of reaching speeds of up to 75 mph. This incredible speed allows them to hunt a variety of prey, including gazelles, warthogs, rabbits, antelopes, ostriches, and even porcupines. After chasing down their prey, cheetahs use their sharp claws and teeth to make the kill. With their powerful legs and long tail for balance, cheetahs are able to outrun and outmaneuver their prey, making them one of the most successful predators in the wild.

Short about Cheetahs
Are the fastest land animals that can reach speeds of up to 113 km/hour, running like the wind with amazing acceleration