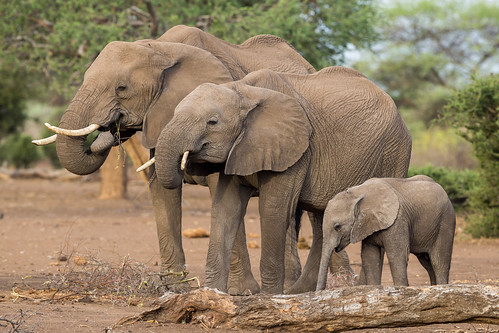 Fact 1
An elephantâs life span ranges from 50 to 80 years. The gestation period is 22 months and a female elephant gives birth on average of every 4 years.

Fact 2
Their daily consumption of food in summer is 150 to 170 kg and 200 to 280 kg in rainy season. Elephants get dehydrated easily and need water once every 24 hours to survive.

Fact 3
The size of an elephantâs brain is the largest as compared to other land animals. They are intelligent animals and exhibit behaviors associated with art and music and they can also display grief.

Fact 4
The soft cushioned undersides of their feet enable them to walk soundlessly. They can run up to 40 km per hour.

Fact 5
The female elephants live together in tight groups and are lead by the matriarch, while males generally live solitary lives.

Fact 6
The tusks continuously grow as second upper incisors up to 18 cm in adult males. An elephant uses its tusks to de-bark trees and clear paths in the jungle and also as weapons for establishing territories and marking trees.

Fact 7
The trunk sucks up the water which is then blown into the mouth or sprayed on the body for bathing and this is followed by spraying mud and dirt to protect their skin.

Fact 8
Elephants display aggression by flinging dust in the air and twirling trunks or fluttering their large ears.

Fact 9
These animals are herbivores and they feed on fruits, leaves, grass and herbs.

Fact 10
Their wrinkled skin helps regulate the temperature of their bodies and retain humidity.


Are called the âKing of the jungleâ because of their magnificent physique and also because they display brave fighting skills.


Are the most garrulous pinnipeds or marine mammals with broad heads, flippers, short muzzle, small eyes, tusks and whiskers.


Are mostly semi-aquatic animals that belong to the same family as badgers, polecats, weasels and wolverines.