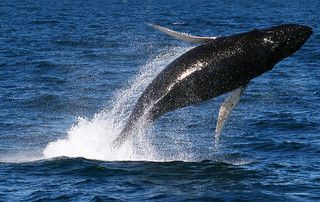 1. The Largest Animal on Earth: The Female Blue Whale

Also → The Heart of the Blue Whale


2. The Incredible Growth of the Blue Whale calves

The new born calves of the majestic Blue Whale are an impressive 6-7 meters in length, making them one of the largest mammals on the planet. This is an incredible feat, considering that the adult Blue Whale can reach lengths of up to 30 meters and weigh up to 180 metric tons. The newborn calves are able to swim and feed on their own shortly after birth, and are able to double their length in the first year of life.

3. The Evolution of Whales

Around 50 million years ago, whales made the transition from land to sea, becoming the majestic marine mammals we know today. This evolutionary shift allowed them to take advantage of the vast resources of the ocean, such as an abundance of food and protection from predators. Since then, whales have adapted to their aquatic environment, developing specialized features like blowholes, streamlined bodies, and flippers. They have also evolved a variety of behaviors, such as breaching, spyhopping, and lobtailing, that help them to survive and thrive in the depths of the ocean.

Also → Narwhals Have the Longest Tusk in the Whale Family

Whales are some of the largest creatures on the planet, and they need to consume a staggering amount of food to sustain their size. On average, whales need to eat between 50-150 kilograms of meat every day in order to stay healthy and active. That's the equivalent of about 110-330 pounds of food per day! To put that into perspective, that's like a human eating between 8-20 large pizzas every day.


5. The Incredible Sperm Whale: A Master of Breath Holding

The incredible sperm whale is capable of holding its breath for an astonishing hour or more! This remarkable feat is made possible by its large and powerful lungs, which allow it to store a large amount of oxygen and stay underwater for extended periods of time. This is an invaluable adaptation for a species that spends much of its life in the depths of the ocean, hunting for food and avoiding predators.

Also → 50 Tons of Food: How Our Diet Impacts Our Lives

6. The Tiny Whales of the North Atlantic and North Pacific Oceans

The harbor porpoise is one of the smallest whales, measuring in at a mere 1.5 meters in length. This species of whale is found in coastal waters of the North Atlantic and North Pacific oceans, and is easily distinguishable by its small size and triangular dorsal fin. Harbor porpoises are known to feed on small fish, squid, and crustaceans, and are often seen in groups of up to 10 individuals.

Also → Antarctica: Home to a Wide Variety of Wildlife

The majestic blue whale is the largest whale in the world, with some specimens reaching an astonishing 30 meters in length and weighing as much as several elephants combined. These gentle giants are truly a sight to behold, and their size is a testament to the incredible diversity of life in the ocean.

9. The Giant Brain of the Sperm Whale

Sperm Whales are truly remarkable creatures, possessing the largest brain of any animal on the planet. This impressive organ can weigh up to an astonishing 9 kilograms, which is five times larger than the average human brain. This remarkable organ is believed to be the reason why Sperm Whales are so intelligent, with some scientists even suggesting that they may be capable of complex problem solving and communication.

Also → Elephants have the largest brain of any land animal

Whales are fascinating creatures, and one of the most interesting facts about them is that they can't breathe through their mouths. This is because the mouth of a whale is connected directly to its stomach, meaning that air cannot pass through it. This is why whales must come to the surface of the water to breathe, as they have blowholes on the top of their heads which allow them to take in air.

Short about Whales
Whales are very large marine mammals, that live in the oceans.