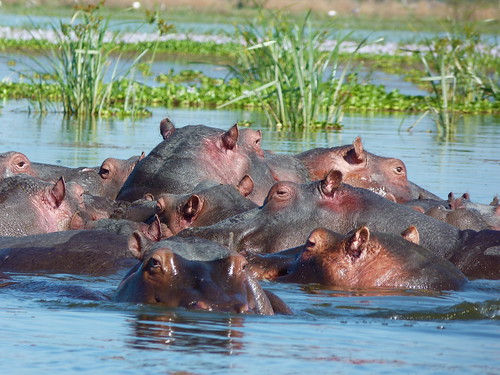 Hippopotamuses are truly impressive creatures, with fully grown adults weighing an incredible 1Â½ to 3Â½ tons and measuring up to 13 feet long and 5 feet high. These enormous animals are a sight to behold, and their sheer size is a testament to their strength and power.

Also → Snakes can stay underwater for long periods of time

Hippopotamuses have an interesting way of keeping cool in hot climates - they submerge their bodies in lakes and rivers, as they have no sweat glands. To protect their skin from sunburn, they secrete a red fluid from their skin, which acts as a natural sunscreen. This fluid is also believed to act as an antibiotic, helping to protect them from infection.

Also → The Incredible Sperm Whale: A Master of Breath Holding

Hippopotamuses are surprisingly adept swimmers, able to hold their breath underwater for up to five minutes! This impressive feat is made possible by their large lungs, which allow them to store a large amount of oxygen. They are also able to close their nostrils and ears when submerged, preventing water from entering their bodies. This allows them to stay underwater for extended periods of time, making them one of the few land animals that can swim with ease.

4. Hippopotamuses are able to stay submerged for long periods of time

Hippopotamuses have evolved to be able to stay submerged for long periods of time, with their eyes and nostrils placed high on their heads to enable them to breathe and see even when most of their body is underwater. This adaptation is further enhanced by their ears and nostrils which close automatically when they are submerged, allowing them to stay underwater for extended periods of time.

Hippopotamuses are one of the most dangerous creatures in the animal kingdom. Not only are they incredibly aggressive, but they also have long canine tusks that can grow up to a foot in length, which they use to fight off any challengers. To make matters worse, they have a unique way of warning potential attackers of their intentions - they yawn! This is a sure sign that they are about to attack, so it's best to keep your distance.

At dusk, Hippopotamuses emerge from the water to feed on a variety of vegetation, including grass, fallen fruit, corn, and sugar cane. This nocturnal behavior allows them to avoid the heat of the day and the predators that come with it. Hippopotamuses are herbivores, and their diet consists of a variety of plants, including aquatic plants, grasses, and fruits. They are able to consume large amounts of food in a single night, and their diet helps them to maintain their large size.

Hippopotamuses are social creatures, despite their solitary feeding habits. They often congregate in groups of up to thirty individuals, and while they may feed alone, they remain close to their peers when resting. This behavior is thought to be a way of protecting themselves from predators, as well as a way of maintaining social bonds.

Hippopotamuses are social creatures that live in herds, or 'bloats', of 10 to 30 individuals. These herds are typically made up of a dominant male, several females, and their young. The dominant male is responsible for protecting the herd from predators, while the females take care of the young. The herd will often stay together for years, with the dominant male leading the group to new sources of food and water.

Hippopotamuses have an incredibly long gestation period of around 230 days, and when the calves are born, they are already quite large, weighing between 55 and 120 lbs. Even more remarkable is that the calves are born underwater and nurse underwater, making them one of the few mammals to do so.

Hippopotamuses are one of the longest-living large mammals, with an average life expectancy of 45 years. This is significantly longer than other large mammals, such as bison, which typically only live for around 45 years. Hippos can live up to 50 years in the wild, and even longer in captivity. They are also one of the heaviest land mammals, weighing up to 3,500 kilograms.

Also → Amazing Sea Lions Can Dive Up to 600 Feet Underwater

Short about Hippopotamuses
Are extremely heavyweight animals with a round body, short, stocky legs and a large head.