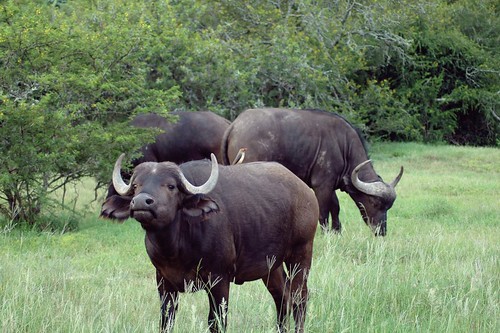 Water buffalos, originally native to Asia, have since spread to other parts of the world, including Africa, Australia, Europe, and North America. These animals are now found in a variety of climates, from tropical rainforests to arid deserts, and are used for a variety of purposes, such as plowing fields, providing milk, and even as a source of meat. Water buffalos are an integral part of many cultures, and their presence in so many different parts of the world is a testament to their adaptability and usefulness.

Water Buffalos are highly social animals, living in herds and rarely straying far from one another. When threatened by predators, they instinctively huddle together for protection, demonstrating their gregarious nature. They are not territorial animals, preferring to roam in large groups rather than stake out a specific area.

3. The Water Buffalo: An Impressive Creature

Water Buffalos are herbivorous animals that feed mainly on marsh grasses, herbs, and green vegetation. When they are in close proximity to marshy areas, they supplement their diet with aquatic plants such as bulrushes, reeds, and water hyacinth. This diet helps them to stay healthy and strong, and is essential for their survival in marshy areas.

Water buffalos are fascinating creatures that are well-adapted to their environment. They can be found living in forests, swamp forests, and plains, but they particularly enjoy lounging in muddy wetlands and swamps. This is because their hooves are specially designed to prevent them from sinking in the wet, mushy mud. This allows them to move around with ease and never have to worry about getting stuck in the mud.

Also → Komodo Dragons are the world's most ferocious eaters

The Water buffalo is an impressive animal, weighing in at an average of 700 kg and standing at a height of 5.6 feet. These majestic creatures can range from 500 kg to 900 kg in weight and from 5 feet to 6.2 feet in height, making them one of the largest domesticated animals in the world.

Water buffalos are fascinating animals, possessing a unique digestive system that is specially adapted for the digestion of plant-based food. As ruminants, they have four-chambered stomachs that allow them to break down and extract nutrients from the tough cellulose found in grasses and other vegetation. This digestive system is highly efficient, allowing them to extract more nutrients from their food than other animals. Additionally, water buffalos are able to regurgitate and re-chew their food, further aiding in the digestion process.

Also → Camels Can Survive Without Water for Up to Five Days

Water buffalos are fascinating animals that have developed a unique way of grooming and relieving themselves from insect bites. They create shallow depressions in the soil and then roll around in them, allowing the soil to act as a natural exfoliant and providing relief from any pesky insect bites. This behavior is not only interesting to observe, but it also serves an important purpose in the water buffalo's life.

10. A Fascinating Creature With A Unique Gestation Period

Water buffalos are fascinating creatures, with males mating with multiple females in certain areas, depending on the season. Females produce a calf every two years, with a gestation period of 11 months. This means that the female water buffalo will be pregnant for almost a year before giving birth to her calf.

Also → Flamingos Use Unique Feeding Technique to Get Their Daily Nutrition

Short about Water Buffalos
Are large formidable mammals with sparse black-gray coats that belong to the Bovine family.