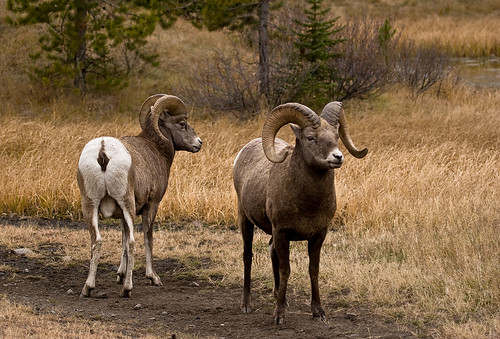 Fact 1
Rams are gregarious, precocial, defenseless creatures. They flock together for protection and have a flight zone which is the space they keep between themselves and others.

Fact 3
Rams have a split in their upper lip which enables them to pick preferred leaves off the plant.

Fact 4
They have large curled horns and these serve as a status symbol and weapon when battling other rams over mating rights.

Fact 5
Rams do not like to walk in water or move through narrow openings. They prefer to move into the wind and uphill.

Fact 6
They are herbivores and their diet mainly consists of cacti, grasses, plants and forbs. Rams use their hooves and horns to get rid of the spines when eating cacti and the juice inside.

Fact 7
These animals have an excellent sense of hearing though they have a poor depth perception. They live 9 to 15 years.

Fact 8
The collective name for a group is a herd or flock. Males are called Rams or bucks and females are called Ewes. A castrated male is called a Wether.

Fact 9
The rut is the mating season of ruminant animals.


Are wooly, ruminant mammals belonging to the genus Ovis of the family Bovidae.


Are members of the antelope family and have long faces, long black horns and a short tail with beard like hair on their chins.

Short about Rams
Are wooly, horned ruminant grazing mammals that may be wild or domesticated.