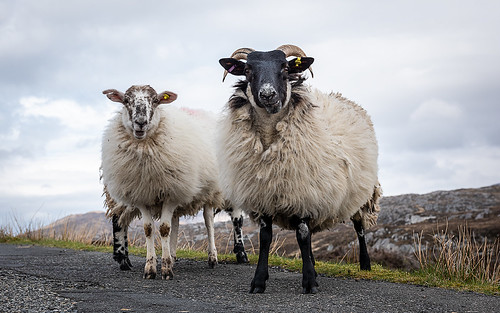 Fact 2
They have 32 teeth and live in pastures. They do not have teeth in their upper front jaw. They have 24 molars and 8 incisors. Their lifespan is about 12 to 15 years.

Fact 3
Sheep eat hay, tree leaves, grass and ferns as they are herbivorous. Their digestive system features four chambers which help break down their intake.

Fact 4
They do not seek shelter from rain but seek shade. Breeding sheep are called Tupping.

Fact 5
Sheep have fleece and are quite skittish. They make different vocalizations to communicate different emotions.

Fact 6
The collective name for a group is a flock or herd or mob.

Fact 7
Sheep have a field of vision around 300 degrees. They do not have to turn their head to see behind.

Fact 8
Sheep have good memories and display emotions which can be studied by observing the position of their ears. Sheep are known to self-medicate when they are ill by eating specific plants that can cure them.

Fact 9
The act of breeding is called âtubing and the act of giving birth is called âlambingâ The doe can have 1 to 3 lambs per litter.


Are small domesticated or wild swimming birds that are broad-billed and web-footed belonging to the Anatidae family of birds.


Are mammals with short tails and a pencil of air on the tip of the ears, belonging to the cat family, Felidae (Lynx rufus).

Short about Sheeps
Are wooly, ruminant mammals belonging to the genus Ovis of the family Bovidae.