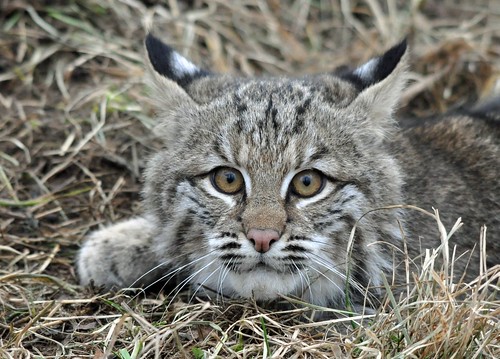 Fact 1
The fur color of Bobcats ranges from yellow to gray brown.

Fact 2
They are nocturnal animals that are agile and climb well. They are fierce hunters and mark their territories with claw marks and deposits of urine.

Fact 5
Bobcats have a main natal den and several secondary dens under rock shelters or caves. They are also found under fallen trees, brush piles or hollow logs.

Fact 6
They walk for 4 miles every day and do not have an accurate sense of smell. They are excellent swimmers, stalkers and hunters.

Fact 7
Bobcats are carnivores and eat small animals such as mice, squirrel, birds and rabbits. They even hunt deer, sheep, poultry and young pigs.

Fact 8
They communicate by a variety of vocalizations which includes yowls, spits, mews, hisses and purrs.

Fact 9
The collective name for a group is a clutter or clowder.

Short about Bobcats
Are mammals with short tails and a pencil of air on the tip of the ears, belonging to the cat family, Felidae (Lynx rufus).