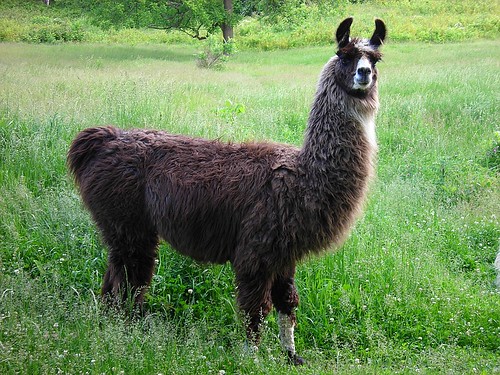 1. The Gentle Animals With a Long Lifespans

Llamas are known for their long lifespans, with good care they can live for up to 30 years. They are hardy animals, able to survive in a variety of climates and terrains, and are often used as pack animals in mountainous regions. Llamas require regular exercise, a balanced diet, and regular veterinary check-ups to ensure they remain healthy and live a long life. With proper care, these gentle creatures can provide companionship and joy for many years.

Also → Huarizo Alpacas: A Hybrid Animal With a Luxurious Coat


2. Llamas are Highly Social Animals That Prefer to Live in Herds

Llamas are highly social animals, often living in herds of up to 20 individuals. They are very social creatures, preferring to live in groups and forming strong bonds with their herd members. They communicate with each other through a variety of vocalizations, body language, and scent marking. Llamas are also very protective of their herd, and will often act aggressively towards potential predators.

Llamas are known for their incredibly soft wool, which is prized for its lanolin-free quality. This wool is perfect for those with sensitive skin, as it is hypoallergenic and free of any harsh chemicals. It is also lightweight and breathable, making it an ideal choice for clothing and accessories. The wool is also incredibly durable, making it a great choice for those looking for a long-lasting fabric.

4. Llamas are incredibly intelligent animals that can learn simple tasks

Llamas are incredibly intelligent animals, capable of learning simple tasks after just a few repetitions. They are able to remember commands and routines, and can even be trained to pull carts and carry packs. Llamas are also social animals, forming strong bonds with their owners and other animals. They are known to be gentle and friendly, making them great companions for people of all ages.

Approximately 40 million years ago, the llama made its first appearance in the central plains of North America. After a few million years, the species began to migrate southward, eventually settling in South America around three million years ago. Since then, llamas have become an integral part of the culture and economy of the Andean region, providing a source of food, clothing, and transportation.

6. llamas have a long gestation period

Also → Wolves are Highly Social Animals That Live in Packs

Llamas are incredibly quiet animals, rarely making any noise beyond a soft humming sound. Instead, they communicate primarily through body language, such as head nodding, ear twitching, and lip curling. This makes them an ideal animal for those who want to keep their environment peaceful and quiet.


8. Llamas are an increasingly popular choice for guard animals

Llamas are an increasingly popular choice for guard animals, as they are highly effective at protecting sheep and goats from coyotes. Their natural instinct to protect their herd, combined with their loud vocalizations and intimidating size, make them an ideal choice for guarding livestock. Llamas are also relatively low-maintenance, requiring minimal food and water, and they can be trained to respond to commands. With their natural protective instincts and easy-to-care-for nature, it's no wonder that llamas are becoming a go-to choice for guarding livestock.

Llamas are the perfect companion for day hikes and packing trips due to their soft, padded feet. This makes them an environmentally friendly choice, as their feet are gentle on the terrain and leave minimal impact. Not only are they great for the environment, but they are also incredibly friendly and make great companions for outdoor activities.

Also → The Life and Intelligence of a Small, Furry Creature: The Rat

Llamas are often portrayed in popular culture as spitting at people, which can lead to fear of approaching them in public settings. However, most llamas that are seen in parades and fairs have been extensively trained by their handlers to not spit, as spitting is a natural defense and dominance behavior among all camelids. This training helps ensure that llamas can be safely interacted with by the public.


is a domesticated species of South American camelid.