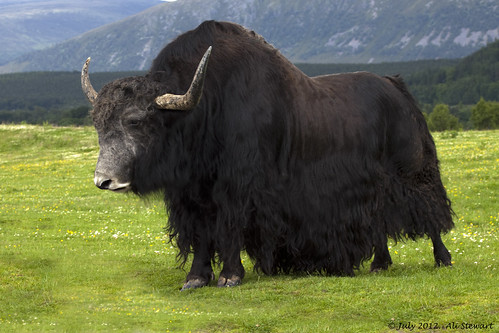 Fact 1
Domestic yak are being used as draft animals and for travel. These animals are also considered valuable for their meat, milk, cheese, wool, and dung.

Fact 2
A yak has no problem climbing: It can climb altitudes as high as 20,000 feet, which is considered the highest elevation of the habitat of any mammal.

Fact 3
Yak cheese contains very healthy fats including omega-3 fatty acids and conjugated linoleic acid (CLA), but has a lower total fat content compared with cheese that is made from cow milk (like cheddar cheese). This is because the yakâs food intake includes shrubs and of grasses, which are considered better sources of fatty-acids than the industrial grain. Yak cheese also tastes really good.

Fact 4
During the winter season, a wild yak can still live in temperatures that are even as low as - 40 degrees (F).

Fact 6
A yakâs digestive system serves as an internal heater, enabling food to be digested at a very warm temperature of 104 Â°F, keeping the food warm in cold conditions. A yak also has more than a single stomach, which the animal uses to absorb the healthy nutrients from plants.

Fact 7
Yaks may even live to as long as 20 years or more.

Fact 8
The yak dung can be dried and used as a useful fuel in the Tibetan plateaus.

Fact 9
The yak likes to take a cold bath. Apart from the animalâs inner heater, it has developed ways of surviving the cold and is able to survive harsh temperatures of â40 degrees F. Even at this temperature, yaks have even been seen swimming in lakes and rivers. The warm coat of the yak provides thick insulation through an outer coating consisted long hair and an inner coating consisted of matted, shorter fur.

Fact 10
Yaks are very huge creatures. The male wild yak for example can reach up to as high as 6.5 feet at the shoulder and weigh to as big as 2200 pounds. Wild female yaks, on the other hand, are up to a third of the size of their male counterparts.


Cheese is a generic term for a diverse group of milk-based food products.


Are warm blooded intelligent mammals that have been known to help humans in many circumstances and loved by them.


Are large felines with long thick whitish fur native to the rugged and snowy highlands of Central Asia and South Asia including China.


Are cold-blooded or ectodermic reptiles that are classified under the Order Testudines.


are a sandwich consisting of one or more cooked patties of ground meat (beef, pork, turkey, chicken, etc.) usually placed inside a sliced hamburger bun.

Short about Yaks
Is a long-haired bovine that can be found in the Himalayan region located in south Central Asia, the Tibetan Plateau and even as far north as Mongolia and Russia.