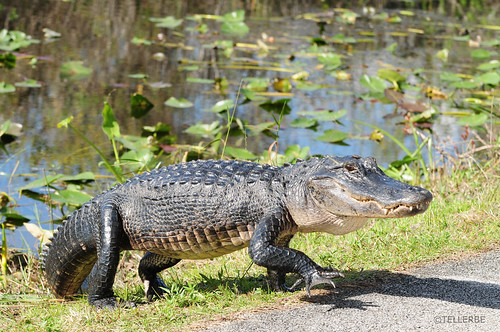 1. The American and Chinese Alligators Are Two Distinct Species


2. American Alligators Are Massive and Powerful

The American Alligator is an impressive creature, with males reaching an average length of 13 feet and weighing over 1,000 lbs, while females typically reach 10 feet in length. These powerful reptiles are found in the southeastern United States, and are known for their strength and agility in the water. Alligators are apex predators, and their diet consists of fish, turtles, small mammals, and birds. They are also known to scavenge for carrion.

Also → The largest reptiles in the world: Crocodiles

3. Alligators have some unique features

Alligators are fascinating creatures with some unique features. They have two sets of eyelids, one to protect their eyes while underwater and the other to keep them moist when they are on land. Additionally, they have an impressive set of teeth, with nearly 74-80 at any given time. Unfortunately, they cannot move their tongue, so they must lift their heads in order to swallow their food.

4. Alligators Glow in the Dark

At night, when a light is shone upon them, the eyes of alligators can be seen to glow in a variety of colors. Large alligators have eyes that glow a deep, fiery red, while the eyes of smaller alligators glow a bright, emerald green. This phenomenon is known as 'eyeshine', and is caused by the reflection of light off the tapetum lucidum, a layer of tissue located behind the retina of the eye.

Alligators are known for their powerful bite, thanks to their relatively strong jaw muscles. However, their muscles for opening the mouth are surprisingly weak, meaning that a human can easily hold their jaws shut with just their bare hands or even a simple piece of duck tape. This makes alligators a surprisingly manageable creature, despite their intimidating size and strength.

6. Alligators are the perfect predators

Alligators are voracious predators, with a diet that includes birds, fish, turtles, snails, crustaceans, deer, and various mammals. They have powerful jaws and sharp teeth that allow them to easily tear apart their prey, and they can consume up to half their body weight in a single meal. Alligators are also opportunistic feeders, meaning they will take advantage of any food source they can find, including carrion and even human garbage.

Alligators are long-lived creatures, with lifespans ranging from 35 to 50 years in the wild, and even longer when held in captivity. In fact, some alligators have been known to live up to 70 years in captivity, making them one of the longest-living reptiles in the world.

Alligators are incredibly fast creatures, capable of lunging at speeds of up to 20 mph in short bursts. This impressive speed is made possible by their powerful tails, which propel them forward with incredible force. Alligators are also able to move quickly in water, using their webbed feet to propel them through the water at speeds of up to 11 mph. This combination of speed and power makes them one of the most formidable predators in the animal kingdom.

Alligators are incredibly resilient creatures, with their tough skin and bony plates, known as 'scutes', providing them with an armored back that is immune to snake poison. This armor-like protection is essential for alligators, as it helps them to survive in their natural habitats, such as swamps, marshes, and rivers. The scutes are made up of a hard, bony material that is covered in a layer of tough, leathery skin, which helps to protect them from predators and other dangers.

Short about Alligators
Are cold blooded reptiles that get their name from a Spanish word El Lagarto, meaning âlizardâ.