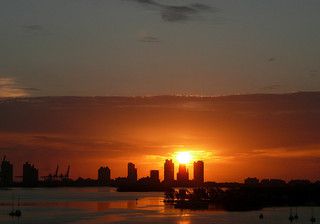 1. Florida's Lightning Capital: How to Stay Safe from Lightning Strikes

Florida is known as the lightning capital of the United States, and it's no wonder why - with an average of 40 lightning strikes per square mile in Central Florida each year, it's no surprise that the state sees an average of 10 deaths and 30 injuries per year from lightning-related incidents. It's important to be aware of the dangers of lightning and take the necessary precautions to stay safe.

Also → Orlando, Florida: A City of Lakes and a Popular Tourist Destination


2. The Most Visited City in the Country

Orlando, Florida is the most popular tourist destination in the United States, with an astonishing 62 million visitors in 2014. This incredible number of visitors makes Orlando the most visited city in the country, and it's easy to see why. With its world-famous theme parks, beautiful beaches, and vibrant nightlife, it's no wonder that so many people flock to the Sunshine State each year. Whether you're looking for a family vacation, a romantic getaway, or an adventure-filled weekend, Orlando has something for everyone.

Also → The History of Spring Training in Saint Petersburg, Florida

3. The Endless Shoreline: A Guide to the Best Beaches in Florida

In Florida, the ocean is never far away! No matter where you are in the state, you're never more than 60 miles from the shoreline. Whether you're in the bustling cities of Miami or Orlando, or in the more rural areas of the Panhandle or the Keys, you can always find a beach nearby to enjoy the sun, sand, and surf. With over 1,350 miles of coastline, Florida is a great place to explore the wonders of the ocean.

4. The Floridian Origins of "The Sunshine State"

The state of Florida is known as "The Sunshine State" due to its abundance of sunshine and warm weather, but its name has a much more poetic origin. The name Florida is derived from the Spanish phrase "Feast of Flowers", which is a reference to the abundance of flowers that bloom in the state's tropical climate. This nickname is a fitting tribute to the beauty of the state and its lush vegetation.


5. The History of Gatorade

In 1965, a team of scientists in Florida developed the iconic sports drink Gatorade, which was named after the University of Florida Gators. This revolutionary drink was created to help replenish the electrolytes and carbohydrates lost during intense physical activity, and has since become a staple in the diets of athletes around the world. Gatorade has been credited with helping the Gators win their first Orange Bowl in 1967, and has since become a symbol of the University of Florida's athletic success.

In the beautiful state of Florida, you can have a once-in-a-lifetime experience of swimming with gentle manatees in the Crystal River. This is the only place in North America where it is legal to do so, and the experience is supervised by experienced professionals to ensure the safety of both the manatees and the swimmers. The manatees are known to be gentle and curious creatures, and swimming with them is an unforgettable experience.

Located in Wakulla Springs near Tallahassee, Florida, is the world's deepest freshwater spring. This natural wonder is an impressive sight, with its depths reaching over 200 feet and its width spanning over 500 feet. It is home to a variety of wildlife, including manatees, alligators, and a variety of fish. Visitors can take a boat tour to explore the depths of the spring and observe the diverse wildlife that inhabits it.

Founded in 1565 by Pedro MenÃ©ndez de AvilÃ©s, Saint Augustine, Florida is the oldest European settlement in North America. Located in what was then La Florida, a part of New Spain, the city has a long and storied history, with its founding predating the United States by over 200 years. Today, Saint Augustine is a popular tourist destination, with its cobblestone streets, Spanish colonial architecture, and numerous attractions drawing visitors from around the world.

Also → Tallahassee: The City of Vast Beauty and Size

Since 1954, the Annual Mug Race of Florida has been the longest river sailboat race in the world. Starting in Palatka, the race course winds its way along the St. Johns River for over 100 miles before ending in Jacksonville. This unique event has been a beloved tradition for generations of Floridians, and continues to draw sailors from all over the world.

Florida is a paradise for golfers and water-lovers alike, boasting over 30,000 lakes and over 1000 golf courses. The World Golf Hall of Fame and Museum, located in the historic city of St. Augustine, is a must-see for any golf enthusiast. With its rich history and stunning architecture, the museum is a testament to the sport's long-standing legacy. From the lush greens of the golf courses to the crystal-clear waters of the lakes, Florida is a golfer's dream come true.