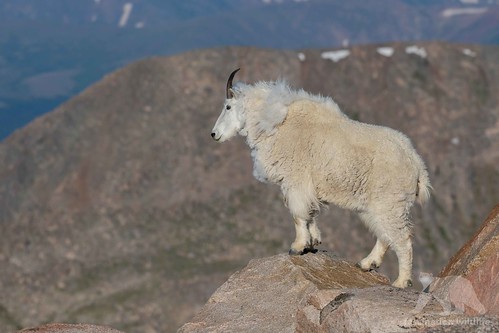 Contrary to popular belief, Mountain Goats are not true goats, but they are closely related to them. They are actually members of the antelope family, and are native to the Rocky Mountains and Cascade Range of North America. They are well-adapted to living in high altitudes, and can be found at elevations of up to 14,000 feet. They have thick fur coats to protect them from the cold, and their hooves are specially adapted to help them climb steep, rocky terrain.

Mountain Goats are well-adapted to their high-altitude environment, with a thick, wooly coat of white fur to keep them warm in the cold temperatures. This coat is shed in the summer months when the temperatures become too hot, allowing the goats to stay cool and comfortable. The fur is also waterproof, helping to protect them from the elements and keep them dry in wet conditions.

Mountain Goats are remarkable animals, able to traverse the steepest of slopes with ease. Their muscular forequarters and pliable cloven hooves provide them with the traction they need to climb up to 60 degree inclines. This remarkable ability allows them to access food sources and habitats that would otherwise be inaccessible to them.

4. A Variety of Diet Keeps Them Alive

Mountain goats are known for their impressive climbing abilities, but they also have a diverse diet. They feed on a variety of plants, including herbs, grass, shrubs, ferns, sedges, lichen, and moss. This varied diet helps them to survive in their mountainous habitats, where food sources can be scarce.

Also → The Resilience of the Yak

Mountain Goats are a species of wild goat that inhabit mountainous regions of North America. During the late autumn months of November and December, these animals enter their mating season. During this time, males will compete for the attention of females, often engaging in physical contests such as head-butting and clashing horns. The mating season is an important time for the species, as it is when the females will give birth to their young in the spring.

When two male mountain goats, or billies, are vying for the attention of a female, they will often engage in a fierce battle. The two billies will lunge at each other's sides, using their horns or flanks as weapons. The fight can be quite intense, with the billies pushing and shoving each other in an attempt to gain dominance. The victor of the battle will then be able to mate with the female, while the loser will have to look elsewhere for a mate.

Female mountain goats, known as nannies, live in bands or herds with their kids, while the males tend to live alone or in small groups of two or three. These nannies are incredibly devoted to their young, and will often stay with them for years, teaching them the skills they need to survive in the wild. The males, on the other hand, are more solitary, and will often wander off on their own, only returning to the herd to mate.

Also → Keep your cats, dogs, goats, and horses away from avocados

Mountain Goats are remarkable animals, with a gestation period of 150-180 days. Usually, a nanny will give birth to just one kid, although it is rare for them to have twins. At birth, the kid weighs around 6 lbs and is able to move along the rocks with its mother within a day or so. This remarkable ability to move so soon after birth is a testament to the strength and agility of the Mountain Goats.

Mountain goats are incredibly agile creatures, capable of jumping nearly 12 feet in a single bound! This impressive feat is made possible by their strong hind legs and cloven hooves, which provide them with the necessary traction and power to make such a long jump. Mountain goats are also well-adapted to their mountainous habitats, with their thick fur and sure-footedness allowing them to traverse steep and rocky terrain with ease.

Also → Tanzania's Mt. Kilimanjaro is the highest mountain in Africa

10. 22-month-old mountain goats have a unique way of counting their age

Mountain goats are fascinating creatures, and their age can be determined when they reach 22 months old by counting the number of rings on their horns. Each year, a new ring is added to the horn, making it easy to tell how old the goat is. This is a useful tool for wildlife biologists, as it helps them to better understand the life cycle of the mountain goat.

Short about Mountain Goats
Are members of the antelope family and have long faces, long black horns and a short tail with beard like hair on their chins.