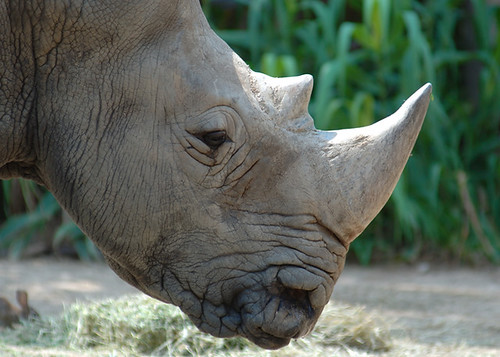 Rhinoceroses are highly endangered animals due to the prized nature of their horns, which are made of keratin - the same material that makes up our hair and fingernails. This has led to poachers hunting them for their horns, putting the species at risk of extinction. The horns are highly sought after for their use in traditional medicines and as decorative ornaments, making them a valuable commodity.

Also → The Majesty of the Polar Bear


2. A 'crash' of rhinoceroses is an impressive sight to behold

A 'crash' is the collective name for a group of rhinoceroses. This term is derived from the sound of their feet pounding the ground as they move together in a herd. Rhinoceroses are large, herbivorous mammals that are native to Africa and Asia. They are known for their thick skin and large horns, which are made of keratin, the same material that makes up human hair and nails. A crash of rhinoceroses is an impressive sight to behold, and a reminder of the power and majesty of nature.

3. Three-Toed Rhinoceros Are Unique and Adaptable

Rhinoceroses are unique animals in that they have only three toes on each foot, and they can sleep either standing up or lying down. This is a remarkable adaptation that allows them to rest while still being able to quickly react to potential threats in their environment. Furthermore, their toes are equipped with sharp, curved claws that help them to move around in their natural habitats.

Standing at an impressive 6 feet tall and stretching up to 15 feet in length, the full-grown rhinoceros is an awe-inspiring sight. Its size and strength make it one of the most powerful animals in the world, and its thick skin and horn make it a formidable opponent. Rhinos are found in Africa and Asia, and they are an important part of the ecosystem, helping to keep the balance of nature.


5. Rhinoceroses are selective herbivores that feed on grass

Rhinoceroses are herbivorous animals that primarily feed on grass, but they also enjoy a variety of other vegetation, such as plant shoots, trees, and bushes. They are known to graze in open grasslands, savannas, and floodplains, and can consume up to 150 kilograms of vegetation per day. Rhinoceroses are also known to be very selective eaters, often choosing certain types of vegetation over others.

6. Rhinoceroses Have a Symbiotic Relationship with Oxpeckers

Rhinoceroses are notoriously near-sighted and easily startled by sudden movements, but they possess an impressive sense of hearing and smell. This is why they have a symbiotic relationship with oxpeckers, small birds that feed on the ticks and insects that live on the rhinoceros' skin. The oxpeckers also act as an early warning system, alerting the rhinoceros of any potential danger.

Rhinoceroses are incredibly intelligent animals, capable of understanding commands and interacting with humans in a variety of ways. In zoos, they often enjoy the attention they receive from visitors, and can even be trained to play 'fetch' and to paint. This is a testament to their remarkable cognitive abilities, and shows that they are capable of forming strong bonds with humans.

Rhinoceroses are incredibly agile creatures, capable of running up to 40 miles per hour and taking sharp turns with ease. In the wild, they can live up to 40 years, making them one of the longest-living large mammals. Their agility and speed make them a formidable opponent in the wild, allowing them to outrun and evade predators.

9. Rhinoceroses Roll in Mud to Protect Thin Skin from Sunburn

Rhinoceroses have a unique way of protecting their thin skin from sunburn: rolling in mud! Not only does this provide a layer of protection from the sun's rays, but it also helps to ward off blood-sucking insects. The mud acts as a natural barrier, keeping the rhinos safe from potential harm. Additionally, the mud helps to keep the rhinos cool in hot climates, making it a win-win situation for these majestic creatures.

Short about Rhinoceros
Have a stocky but powerful built and can weigh up to about 3,500 lbs to 6,000 lbs when fully grown.