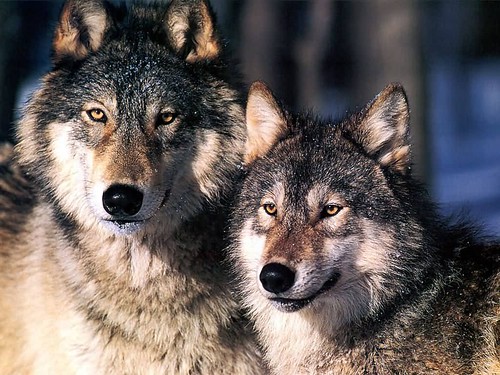 1. The Largest Members of the Wild Canine Family

Wolves are the largest members of the wild canine family, which also includes coyotes, foxes, and jackals. They are part of the same family as domestic dogs, and share many of the same characteristics, such as their sharp sense of smell, their pack mentality, and their powerful jaws. Wolves are highly intelligent and social animals, and they are known for their strong family bonds and their ability to communicate with each other. They are also incredibly adaptable, and can survive in a variety of habitats, from the Arctic tundra to the deserts of North America.

Also → Macedonia is home to a diverse range of wildlife


2. Wolves are Highly Social Animals That Live in Packs

Wolves are highly social animals that live in packs, with the male and female of the pack known as the 'Alphas'. These animals are incredibly family-oriented, with the Alphas leading the pack and caring for their young. Wolves are known to form strong bonds with their pack members, and they often hunt and travel together. The Alphas are responsible for protecting the pack and ensuring their safety.

Also → Dingos: The Dominant Female Kills Any Pups Born to Other Females

3. Rabies and Distemper: What You Need to Know About Wolves

Wolves are majestic creatures that can live up to 10 years in the wild, however, they are prone to infections and diseases such as rabies and distemper, which can significantly reduce their lifespan. These diseases can be spread through contact with other animals, and can be fatal if left untreated. Fortunately, there are vaccinations available to help protect wolves from these illnesses.

Wolves are powerful predators, with jaws capable of generating 1,500 psi of pressure and 42 teeth that interlock to grip and hang on to struggling prey. Their impressive canine teeth are designed to shear meat and crush bones, while their fur is shed once a year to keep them cool in the summer and warm in the winter. With such impressive features, it's no wonder wolves have been able to survive and thrive in the wild for centuries.

Also → The Sensitive Smell of the Possum

During the winter months of February and March, wolves enter their mating season. After a 63-day gestation period, the female wolf will give birth to a litter of pups, usually ranging from four to six in number. The mother wolf will then take care of her young until they are old enough to hunt and fend for themselves.

The average litter size of wolves is between 4 and 7 pups. Wolves typically give birth to their litters in the spring, and the pups are born blind and deaf. The mother wolf will stay with her pups for the first few weeks of their lives, nursing and protecting them until they are old enough to start exploring and hunting with the pack. The pups will stay with their pack until they are old enough to find a mate and start their own pack.

Wolves are highly social animals that communicate with each other through a combination of integration and harmony, rather than through submission and aggression. To defend their territories, wolves use a variety of methods, such as scent marking and vocalizations. These scent markings, which are made by urinating and defecating, serve as a warning to other wolves that the area is already occupied. Wolves also use vocalizations, such as howling, to communicate with each other and to mark their territory. By using these methods, wolves are able to maintain their territories and live in harmony with each other.

In the spring and summer, wolves shed their hair in large sheets. This is due to the two types of hair they have - the "undercoat" and the "guard" hairs. The undercoat is the soft, dense fur that keeps them warm in the winter, while the guard hairs are the longer, coarser hairs that protect the undercoat and provide waterproofing. This shedding process helps to keep the wolves cool in the summer and helps to keep their coats in good condition.

9. How Wolves' Smell Is 100 Times Better Than Humans

Also → The Incredible Strength of a Polar Bear's Sense of Smell

Wolves are remarkable animals, capable of trotting almost endlessly at speeds of 5 to 10 mph. Their front feet are larger than their back feet, which helps them to maintain their speed and agility over long distances. This is an adaptation that has enabled them to survive in the wild for centuries, and it's one of the many reasons why they are such an iconic species.

Short about Wolves
Were the first animals to be domesticated by man and regarded as gods in the Norse mythologies.