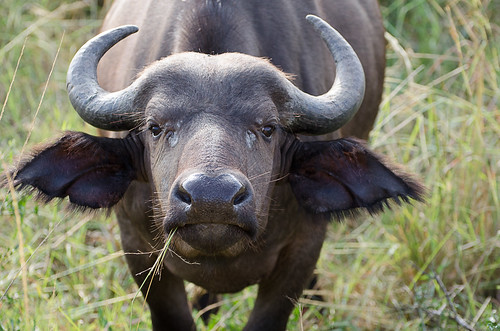 Fact 1
Also referred to as Affalo, the buffalo is one of the most abundant of Africaâs large herbivores. It requires plenty of water and cannot survive in arid regions that have less than 10 inches of rain.

Fact 2
The African buffalo differs from the domesticated water buffalo found in other parts of the world though they both resemble one another superficially.

Fact 3
There is only one genus and one species of buffalo in Africa but this single species has two different types: the small dwarf forest buffalo and the large savanna buffalo.

Fact 4
These buffalos live in large numbers which can be as high as 2000 members.

Fact 5
The horns of an African buffalo are good indicators of their age and gender. The adult male has a hard shielding which protects the base of its skull. This is absent in females and young male buffalos.

Fact 6
Twins and âwhite calvesâ are very rare among the Buffalo species.

Fact 10
They have four times the strength of an ox and can easily tip a motorcar.


Is a landlocked country located in east-central Africa.

Short about Buffalos
Are large bovines with droopy ears and low curved horns.