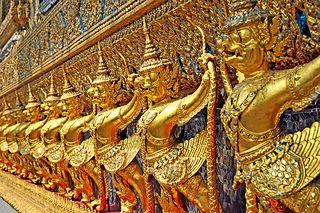 Fact 1
The Thee Lor Sue is the highest waterfall in Thailand and stands 250 meters (820 feet) high. However, these numbers are guestimated since the waterfall has never been studied.

Fact 2
The word "Thai" means "free man" in the Thai language, and therefore, Thailand is referred to as the "Land of the Free."

Fact 4
The King of Thailand, Bhumibol Adulyadej, is estimated to be the world's richest king with an estimated net worth of 30 billion US dollars. Included in his presumed treasury chest, is the Golden Jubilee Diamond, which is the largest faceted diamond in the world (545.67 karats).

Fact 5
The currency in Thailand is the Baht. During the early days of the Baht, the currency was fixed on a silver basis, where 1 Baht was roughly equivalent to 15 grams of silver. However, this was changed in 1902 when the government increased the value of the Baht.

Fact 6
Doi Inthanon is the highest peak in Thailand. The mountain is known as "The Roof of Thailand" and stands 2565 meters (8415 feet) tall.

Fact 7
There are approximately 5 000 elephants in Thailand. However, around 100 years ago there were an estimated 100 000 elephants living in the country.

Fact 8
The life expectancy of a Thai person is 69 years.

Fact 9
The Thai flag has five horizontal bands of red, white and blue. Where red stands for life, white stands for the Buddhist faith and blue represent the monarchy. In other words, the three colors symbolize Thailand's unofficial motto "Nation, Religion, King."

Fact 10
Thailand is the world leading exporter of orchids, and in 2014, Thailand exported orchids to a value of 33.47 billion US dollars. There is estimated to exist more than 1 500 different species of orchids in the world.


Is a South-East Asian country bordered by Thailand to the west and north, Laos to the north and Vietnam to the east and faced by Gulf of Thailand in the south.


The capital of Thailand.


Is a British-Australian actress.


Is a small enclave wedged between the states of Sarawak and Sabah on the Malaysian side of Borneo in Southeast Asia.


Is the 66th largest country in the world with 13 states.

Short about Thailand
Is an independent country that lies in the heart of Southeast Asia.