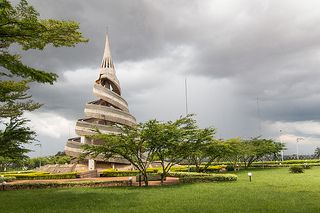 Cameroon made history in 1990 when they became the first African nation to reach the quarter-finals of the FIFA World Cup. This remarkable achievement was made possible by the team's impressive performances in the group stages, where they defeated defending champions Argentina 1-0 and drew with Romania and the Soviet Union. The team's success was celebrated across the continent, and Cameroon's performance in the tournament is still remembered fondly by soccer fans around the world.


2. The Many Voices of Cameroon

Cameroon is a culturally diverse nation, with French and English as its official languages, and a variety of native African languages also spoken. These include Ewondo, Duala, Fulfulde, and many more, each with its own unique dialect and cultural significance. This rich linguistic heritage is a testament to the country's vibrant and varied culture, and is a source of pride for Cameroonians.

On October 1, 1960, Cameroon celebrated its first independence day from France and England, marking the end of a long struggle for freedom and the beginning of a new era of self-governance. This momentous occasion was celebrated with great enthusiasm throughout the country, with people of all ages and backgrounds coming together to commemorate the hard-fought victory. The day was marked with parades, fireworks, and other festivities, and it remains an important national holiday to this day.

4. The Two Main Religions in Cameroon

In Cameroon, Christianity and Islam are the two main religions practiced. Christianity is the predominant faith, with approximately 70% of the population identifying as Christian, while Islam is the second largest religion, with around 20% of the population identifying as Muslim. Both religions have a long history in the country, with Christianity having been introduced by European missionaries in the 19th century and Islam having been present since the 11th century.


5. The Struggles of Rural Cameroonians

In Cameroon, more than a third of the population lives in extreme poverty, with an estimated 30% of the population living on less than $1.25 per day. This means that millions of people in Cameroon are struggling to meet their basic needs, such as food, shelter, and healthcare. The situation is particularly dire in rural areas, where poverty levels are even higher. The government of Cameroon has taken steps to reduce poverty, but much more needs to be done to ensure that all citizens have access to the resources they need to lead healthy and productive lives.

The majestic Mount Cameroon, located in the West African nation of Cameroon, is the tallest mountain in the region, standing at an impressive 4,040 meters (13,255 feet) above sea level. It is an active volcano, with its last eruption occurring in 2000, and is the highest peak in the Cameroon line of mountains. It is also the most active volcano in West Africa, with eruptions occurring as recently as 2012. Mount Cameroon is a popular destination for hikers and climbers, offering stunning views of the surrounding landscape.


8. Rainy A Land of Endless Wonder

Cameroon is a land of abundant rainfall, with an average of 1028 cm of precipitation each year. This makes it one of the wettest countries on the planet, and its lush, green landscape is a testament to this fact. The country's tropical climate and high levels of rainfall create an ideal environment for a wide variety of plants and animals, making it a great destination for nature lovers. With its diverse ecosystems and stunning scenery, Cameroon is a paradise for those looking to explore the wonders of nature.

9. The Beautiful and Vibrant Cameroon Flag

The Cameroon flag is a vibrant symbol of the country's culture and history, featuring three distinct colors: green for vegetation, red for independence, and yellow for sunshine. The flag also features a yellow five-pointed star in the center, representing the unity of the nation's people. The colors of the flag are said to represent the country's natural beauty, its struggle for independence, and its bright future.

Also → Chad: A Land of Contrasts

10. The Land of Pawns: A Guide to Cameroon

Cameroon is a country located in Central Africa, and its name is derived from the Portuguese word "Cameroon", which translates to "River of Pawn". This name was given to the country by Portuguese explorers in the 15th century, who were referring to the Wouri River, which is the largest river in the country. The Wouri River is an important source of water for the people of Cameroon, and is also home to a variety of wildlife.

Also → 45 Million Christians in the Democratic Republic of the Congo


Is located in central Western Africa bordered by Equatorial Guinea in the northwest, Cameroon in the


Is a landlocked country located in Central Africa.


Is a country in West Africa. It borders Togo to the west, Nigeria to the east and Burkina Faso and N


is a country in West Africa.


Is a landlocked country in the Sub-Saharan Africa bordered by Zambia to the North West, Tanzania to


Is a country in south-central Africa bordered by Namibia on the south, the Democratic Republic of th

Short about Cameroon
Is a country located in west Central Africa.