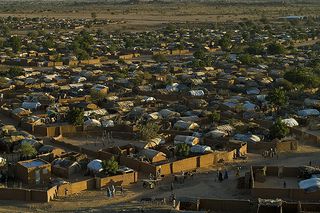 1. A Land of Diversity and Opportunity

Chad is a culturally diverse country, home to over 200 ethnic groups and a staggering 200,000 Sudanese refugees. This has created a unique and vibrant atmosphere, with a wide variety of languages, customs, and beliefs. The influx of refugees has also had a significant impact on the economy, with many of them relying on aid and assistance from the government and international organizations. Despite the challenges, Chad remains a vibrant and welcoming country, with a rich cultural heritage and a strong sense of community.

In Chad, the average woman has a large family, with an average of six children. This is significantly higher than the global average, which is around 2.5 children per woman. This is due to a combination of factors, including the prevalence of early marriage, limited access to contraception, and traditional values that prioritize large families. As a result, Chad has one of the highest fertility rates in the world, with an estimated total fertility rate of 6.2 children per woman.

Also → Haiti: A Caribbean Nation with a Unique Language

4. A Country in Crisis

In Chad, a staggering 80% of the population lives below the poverty line, struggling to make ends meet and facing a daily battle to survive. This dire situation is compounded by the fact that Chad is one of the poorest countries in the world, with a GDP per capita of just $1,400. The lack of access to basic necessities such as food, clean water, and healthcare has had a devastating impact on the people of Chad, with malnutrition, disease, and illiteracy all being major issues.

Also → The Independence of Benin

On August 11, 1960, Chad achieved a major milestone in its history when it gained its independence from France. This momentous event marked the end of French colonial rule in the African nation, and the beginning of a new era of self-governance. The transition to independence was a long and arduous process, but the people of Chad ultimately succeeded in their struggle for freedom. Today, Chad is a sovereign nation, and its citizens are proud of their hard-won independence.

In the mid 1990s, Japhnes Nâdoram was a soccer superstar in Chad, adored by fans across the country. His skillful play and impressive goals earned him the title of 'idol' and he quickly became one of the most beloved players in the nation. His legacy lives on today, with many young Chadian soccer players looking up to him as an inspiration.

7. The Stunning Lake of A Natural Wonder of the World

The stunning Lake of Chad is one of the world's most beautiful natural wonders, and is the nation's top tourist destination. Located in the Sahel region of Central Africa, the lake is the largest in the region, covering an area of over 10,000 square miles. It is home to a variety of wildlife, including hippos, crocodiles, and over 200 species of birds. The lake is also a popular spot for fishing, swimming, and boating, and is a great place to relax and take in the breathtaking views.


8. The Flag of A Vibrant Display of National Colors

The flag of Chad is a vibrant display of the country's national colors, with three horizontal stripes of blue, yellow, and red. The blue stripe is at the top, representing the sky and hope; the yellow stripe in the middle symbolizes the sun and the desert; and the red stripe at the bottom stands for progress and the blood of those who have sacrificed for the nation. Together, these three colors create a powerful symbol of Chad's national identity.

The bustling city of N'Djamena is the largest and most populous in Chad, serving as the nation's capital. Located on the western bank of the Chari River, the city is home to a diverse population of over 1 million people, and is a major hub for trade and commerce in the region. With its vibrant markets, bustling nightlife, and rich cultural heritage, N'Djamena is a must-see destination for any traveler to Chad.


Is a country in West Africa. It borders Togo to the west, Nigeria to the east and Burkina Faso and N


Is an island nation between Fiji and New Caledonia in the West South Pacific Ocean.

Short about Chad
Is a landlocked country located in Central Africa.