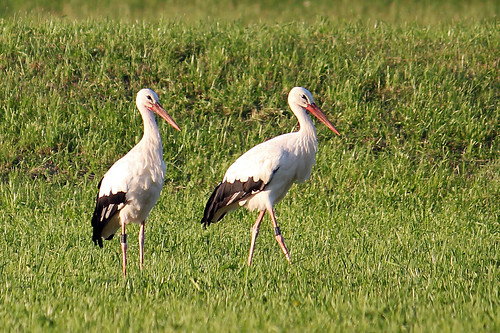 Fact 1
Storks are found on all continents except Antarctica and commonly in tropical regions. These birds inhabit grasslands, wetlands, savannas and tropical forests.

Fact 2
Their upper neck and part or all of the head may be bare of feathers. The bills are typically straight and have a curved opening that allows them to prize the flesh from snails and mussels.

Fact 3
The young ones are called goslings.

Fact 6
They use a range of foraging strategies such as sitting and waiting to actively probing water or soil to feel for prey.

Fact 7
Storks hiss, croak, squeal, whistle or clatter their bills loudly when excites. They fly with neck outstretched and legs trailing with an alternating flapping and soaring flight.

Fact 8
They are found in flocks except during the breeding season.

Fact 9
Their nests consist of large twig platforms which are built on trees, cliff-ledges, rooftops and chimneys. Nest sites are often colonies, with several pairs nesting closely together

Fact 10
Both male and females share in incubating eggs. 3 â 6 chalky-white eggs are laid that hatch in about five weeks and both feed, clean and train the little birds.


Are large and powerful birds of prey that have been considered a symbol of power and freedom in many cultures since ancient times.


Are small domesticated or wild swimming birds that are broad-billed and web-footed belonging to the Anatidae family of birds.


Are large scavenging birds of prey having weak claws and bald heads which feed mainly on carcasses of deal animals.

Short about Storks
Are large graceful wading birds with long-legs, long-necks and long beaks belonging to the family Coconiidae.