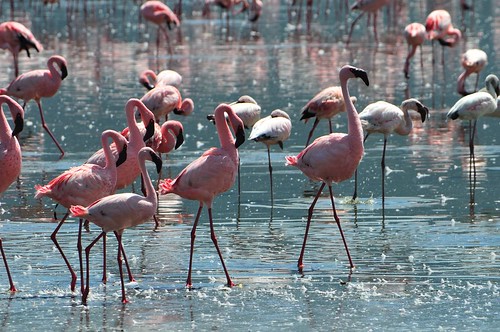 1. From Latin and Spanish 'Flamenco'

The name 'Flamingo' is derived from the Latin and Spanish word 'flamenco', meaning 'fire'. This is due to the bird's unique and vibrant coloration, which is a combination of pink, orange, and red hues. Flamingos are a type of wading bird, and are found in tropical and subtropical regions around the world. They are known for their long legs, curved neck, and distinctive bill. Flamingos are also social creatures, often living in large flocks.


2. How flamingos get their vibrant pink, red, and orange feathers

Flamingos are known for their vibrant pink, red, and orange feathers, which are caused by carotenoid pigments found in their diet. This diet consists of shrimp, plankton, crustaceans, and algae, all of which are essential for the birds to maintain their beautiful coloring. Without these carotenoid pigments, flamingos would be a dull gray color, making them much less of a spectacle to behold.

3. Flamingos have larger eyes than their brains

Flamingos are an impressive sight to behold, with their long legs and bright pink feathers. But what's even more remarkable is that their eyes are larger than their brains! An adult flamingo typically weighs 1.4.4 kg and can range in length from 3.3 feet to 4.6 feet. They're also surprisingly fast, with a top speed of up to 35 mph.

Flamingos are an impressive species of bird, capable of both strong swimming and powerful flight. Despite this, they are most often seen wading in shallow waters, using their long legs to search for food. Flamingos are able to fly up to speeds of up to 35 miles per hour, and can swim up to 5 miles per hour. They are also able to fly for long distances, with some species known to migrate up to 1,500 miles.


5. Flamingos Use Unique Feeding Technique to Get Their Daily Nutrition

Flamingos are fascinating creatures that spend several hours a day skimming the water for food. To do this, they hold their bills upside down while wading in lagoons, swamps, and lakes. This unique feeding technique helps them to filter out food from the water, allowing them to get the sustenance they need.

Also → Polar Bears are the Fastest Swimmers of All Bear Species

Flamingos are highly devoted birds, forming monogamous pairs and laying one egg each year. The female flamingo is responsible for feeding her offspring with a special liquid known as "crop milk". This dark red liquid is high in both fat and protein, and is secreted from the upper digestive tract of the mother. This unique form of nourishment is essential for the growth and development of the young flamingo.

Flamingos are an iconic species, easily recognizable by their bright pink feathers and long, slender legs. In fact, the legs of adult flamingos can be up to 50 inches long - that's longer than their entire body! This impressive length helps them to wade through shallow water in search of food, such as shrimp, algae, and small fish.

Also → Botswana's Salt Pans are a Unique and Remarkable Feature


8. Flamingos are Highly Social Birds That Thrive in Large Flocks

Flamingos are highly social birds, and they thrive in large flocks that can contain up to a million or more individuals. These flocks are known as a 'flamboyance' or 'stand', and they are a spectacular sight to behold. Flamingos are known to form strong bonds with their flock-mates, and they often feed, sleep, and migrate together.

Flamingos are known for their long lifespans, with some living up to 50 years in captivity. On average, they can live between 20 and 30 years in the wild, making them one of the longest-living bird species. In captivity, they can live even longer, with some flamingos reaching the ripe old age of 50 years.

Also → Chickens are Highly Social Creatures That Live in Flocks