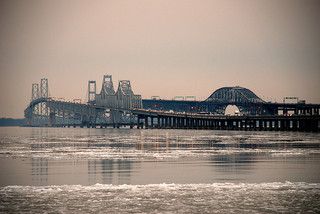 Fact 1
The largest estuary in America lies in Chesapeake Bay and stretches close to 200 miles right from the Susquehanna River upto the Atlantic Ocean.

Fact 2
The bay in Maryland has the Chesapeake Bay Bridge that stretches from Sandy Point to Kent Island. It runs a distance of 4.3 miles and is able to carry 1,500 vehicles in every lane, per hour.

Fact 3
There are over 100,000 creeks, streams or rivers in the Chesapeake watershed. This number includes 150 major rivers.

Fact 4
The Skipjack fleet in the Bay was the last commercially run fishing fleet that used sail power in North America.

Fact 5
Surprisingly, the bay is very shallow and its average depth is only close to 21 feet. This includes all its tidal tributaries.

Fact 6
The bay is home to over 350 fish species and includes the American eel and Atlantic Menhaden.

Fact 7
Annually, one million waterfowl come to winter in this Bay region.

Fact 8
The deep troughs that run along a large section of the length of the bay can be upto 174 feet deep and are considered to be the remnants of the ancient river, Susquehanna.

Fact 9
The Bay, including the tidal tributaries has close to 11,684 miles of shoreline. This exceeds the U.S west coast shoreline.


Is situated on the Atlantic Ocean north of the equator on the mainland of South America.


Is a country located in northern Africa on the Atlantic Ocean, surrounded by Algeria to the east, Morocco to the north and Mauritania to the south.


were seafaring north Germanic people who raided, traded, explored, and settled in wide areas of Europe, Asia, and the North Atlantic islands from the late 8th to the mid-11th centuries.


Khartoum is the capital and second largest city of the Republic of Sudan and Khartoum State.