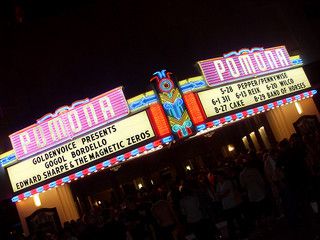 Fact 1
The area was originally occupied by the Tongva or Gabrielino Native Americans.

Fact 2
The city is named for Pomona, the ancient Roman goddess of fruit.

Fact 3
Religious institutions are deeply embedded in the history of Pomona. There are now more than 120 churches, representing most religions in today's society.

Fact 4
Pomona has a Mediterranean climate with hot, dry summers and mild, damp winters and a large amount of sunshine year-round.

Fact 5
In an âI Love Lucyâ episode, the main characters of the show âgo out to the countryâ on a day trip to Pomona. This is now seen as odd due to Pomona since becoming quite urban. In 1940, Lucille Ball and Desi Arnaz spent their honeymoon in downtown Pomona.

Fact 6
The city is the site of the Fairplex, which hosts the L.A. County Fair and the NHRA Auto Club Raceway at Pomona, (formerly known as Pomona Raceway) Powerade Winternationals Drag Racing competition.

Fact 7
2006 film âAlpha Dogâ, directed by Nick Cassavetes, is a film based on the true story of the kidnapping and murder of 15-year-old Nicholas Markowitz and related events, some in Pomona, in 2000.

Fact 8
In a Walt Disney 1940 Cartoon short, âMr. Mouse Takes a Tripâ Mickey & Pluto board a train from Burbank while evading a "no dogs allowed" policy enforced by conductor Pete (Disney) until coincidentally getting kicked out at their destination, Pomona.

Fact 9
In 2003 the film âThe Cat in the Hatâ starring Mike Myers transformed Pomona's Antique Row into a scene straight from the imagination of Dr. Suessâ.


was an American scientist in the field of genetics, and Nobel Prize in Physiology or Medicine Nobel laureate who with Edward Lawrie Tatum discovered the role of genes in regulating biochemical events within cells in 1958.


Is a Canadian actress, film director, singer and screenwriter.


Is a very talented and versatile American born film and television actor with has acted with some of the top film directed and co-stars.


is an American television and film actor

Short about Pomona
is the seventh largest city in Los Angeles County, California.