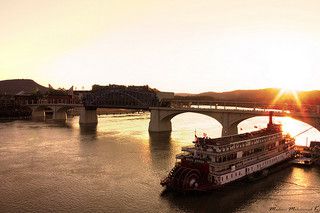 Fact 1
The city lies at the transition between the ridge-and-valley portion of the Appalachian Mountains and the Cumberland Plateau. The city is therefore surrounded by various mountains and ridges.

Fact 2
The official nickname for Chattanooga is the Scenic City, being reinforced by the city's growing national reputation as a haven for numerous outdoor activities.

Fact 3
Chattanooga is internationally known for the 1941 gold record song âChattanooga Choo Chooâ, popularized by Glenn Miller and his orchestra.

Fact 7
Since 1990, Chattanooga has been recognized as a Tree City USA community.

Fact 8
The first inhabitants of the Chattanooga area were American Indians.

Fact 9
As the birthplace of the tow truck, Chattanooga is the home of the International Towing and Recovery Hall of Fame and Museum.

Fact 10
Chattanooga hosts several writing conferences, including the Conference on Southern Literature and the Festival of Writers, both sponsored by the Arts & Education Council of Chattanooga.

Short about Chattanooga
is the fourth-largest city in the U.S. state of Tennessee