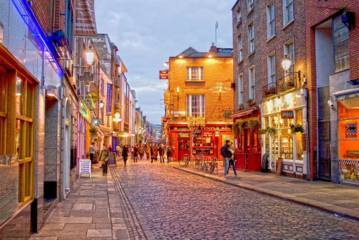 Fact 3
There is a north versus south division in the city because of the River Liffey. The north represents the working-class people while the south is seen as middle and upper middle class.

Fact 4
Though the city does see some snow showers in November to March, hail is more common and rain is the main precipitation in the winter.

Fact 5
Now a major Irish government complex, Dublin Castle was the seat of British rule in Ireland until 1922.

Fact 7
On permanent display at the Trinity College Library in Dublin, is the Book of Kells; an illustrated book created by Irish monks in 800 AD. It is considered Ireland's finest national treasure.

Fact 9
After beginning the installation of cycle lanes in the 1990's, by 2012, the city has over 120 miles of on and off-road tracks for cyclists.

Fact 10
Dublin was named a 'City of Literature' by UNESCO in 2010, as part of their Creative Cities Network.


Ireland is a country located in the north-west of continental Europe.


was an Irish landlord, nationalist political leader, land reform agitator, and the founder and leader of the Irish Parliamentary Party


A city in the northern part of Gauteng Province in South Africa.

Short about Dublin
The capital and largest city of Ireland.