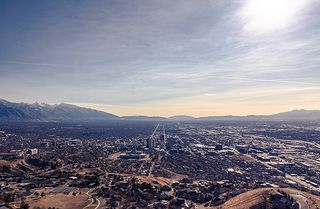 1. A City of Native American Heritage

Salt Lake City was founded in 1847 by Brigham Young, leader of the Mormon faith. Prior to this, the area was home to the Shoshone, Ute, and Paiute Native American tribes, who had lived in the region for centuries. These tribes were integral to the development of the city, providing resources and knowledge to the settlers.

Salt Lake City, the capital of Utah, is known for its hardworking and thrifty citizens, and this is reflected in its state symbol - the Beehive. This symbol was chosen to represent the industriousness of the people of Utah, and to remind them of the importance of hard work and frugality. The Beehive is a reminder of the values that have been instilled in the people of Salt Lake City, and it stands as a symbol of the city's commitment to hard work and thriftiness.

Also → The Salt Bed that Built the City of Detroit

George Washington Bradley and other Mormon followers were instrumental in transforming Salt Lake City into an agricultural oasis. Through their innovative irrigation techniques, they were able to create a suitable environment for crops to grow in the valley, allowing the city to become a major agricultural hub. This was a major accomplishment for the early settlers, and it laid the foundation for Salt Lake City to become the thriving metropolis it is today.

Also → Boise, Idaho - The Most Populous City in Idaho

The majestic Mormon Temple in Salt Lake City stands as a testament to the dedication and hard work of the Mormon community, who spent forty years constructing the building. The temple was completed in 1893 and is now a major landmark in the city, attracting visitors from all over the world. It is a symbol of the faith and commitment of the Mormon people, and a reminder of the importance of perseverance and dedication.

Salt Lake City is home to the headquarters of the Church of Jesus Christ of Latter-day Saints, yet the membership of the church is far less than half the population of the city. Despite this, the church has a strong presence in the city, with many of its members living in the area and contributing to the local economy. The church also has a number of buildings and monuments in the city, including the iconic Salt Lake Temple, which is a major tourist attraction.

6. The Mormons and the US Government

In 1849, the members of the Mormon faith that had settled in Salt Lake City attempted to create a new state called Deseret. They submitted a petition to the US government, but were ultimately denied. Despite this setback, the Mormons continued to build their community in Salt Lake City, and it eventually became the capital of the state of Utah in 1896.

In 2002, Salt Lake City was the proud host of the Winter Olympic Games, a major international event that brought together athletes from all over the world to compete in a variety of winter sports. The city was abuzz with excitement as the world's best athletes gathered to compete in events such as skiing, snowboarding, figure skating, and ice hockey. The games were a huge success, with the city's residents and visitors alike enjoying the festivities and cheering on their favorite athletes. The 2002 Winter Olympics in Salt Lake City will always be remembered as a time of great celebration and joy.

Salt Lake City is a popular tourist destination for skiers and snowboarders alike, thanks to its exceptional skiing conditions. With an average of 500 inches of snowfall each year, the city offers some of the best skiing in the United States. The city is home to several ski resorts, including Snowbird, Alta, and Brighton, all of which offer a variety of terrain for all levels of skiers. Whether you're a beginner or an expert, Salt Lake City has something for everyone.

Also → Miami: A City Named After a Native American Tribe

9. The City of Banking

Salt Lake City is a major industrial banking center in the United States, with many of the nation's largest banks having a presence in the city. It is home to the headquarters of Zions Bancorporation, the largest regional banking company in the western United States, as well as the regional headquarters of Wells Fargo, Bank of America, and U.S. Bank. The city is also home to the Federal Reserve Bank of San Francisco's Salt Lake City branch, which serves as a regional check-processing center. With its strong banking infrastructure, Salt Lake City is a major hub for financial services in the region.

Salt Lake City is a great place for cyclists! Over 80 businesses in the city have joined the Bicycle Benefits Program, which rewards customers who arrive at their shops on two wheels. Not only does this program encourage people to cycle, but it also provides discounts to those who do. So if you're looking for a great way to get around Salt Lake City, why not hop on your bike and take advantage of the savings?

Also → Brasilia: The City of Prophecy

Short about Salt Lake City
Is located in the state of Utah.