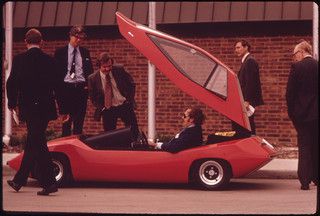 1. The First Highway Mile Made of Concrete

In 1902, Wayne County, Michigan made history by building the world's first highway mile made of concrete. This mile of highway lies on Woodward Avenue, stretching between Six and Seven Mile roads in the city of Detroit. This groundbreaking achievement was a major milestone in the development of modern highways, and it continues to be an important part of Detroit's infrastructure today.

Also → Detroit Hotel: A Tribute to the Home Town of its Founder

During the Prohibition era, Detroit was a major hub for the illegal supply of liquor to the United States. An estimated 75% of the liquor smuggled into the country was transported via the Detroit River, making it one of the most important routes for bootleggers. This influx of illegal liquor had a significant impact on the city, with many speakeasies and other establishments popping up to meet the demand. The Detroit River was also a popular destination for rum-runners, who would often take advantage of the river's shallow depths and hidden coves to evade law enforcement.

WWJ, the pioneering news station based in Detroit, was originally known as 8MK and was the first station in the United States to broadcast news. It was funded by The Detroit News, a newspaper that has been in circulation since 1873. WWJ has been broadcasting news since 1920 and is now the oldest continuously operating radio station in the country.

Also → Michigan: Home to the Car Capital of the World

Belle Isle Park, located in Detroit, Michigan, is the largest island park in America and the city's first big city park. Designed by Frederick Law Olmstead, the same architect who designed New York City's iconic Central Park, Belle Isle Park is a 982-acre oasis of green space, featuring a beach, a conservatory, a golf course, and a zoo. It is a popular destination for locals and visitors alike, offering a variety of recreational activities and stunning views of the Detroit River.

Detroit is a unique city in the United States, as it is the only one of the 48 contiguous states that offers a view of Canada to the south. From Detroit, you can see the Detroit River, which separates the two countries, and the skyline of Windsor, Ontario, Canada. The view is especially beautiful at night, when the lights of the two cities twinkle across the river.


8. The Salt Bed that Built the City of Detroit

The city of Detroit is built on a massive salt bed, with salt mines covering 1,400 acres of land that lies 1,200 feet below the surface. This underground network of salt mines is an expansive one, with over 50 miles of roads crisscrossing through it. This salt bed is an integral part of the city's infrastructure, providing a unique foundation for the city and its inhabitants.

9. The Birthplace of Techno and Motown

The city of Detroit is renowned for its musical heritage, particularly its Motown sound. This genre of music, which originated in the city, is characterized by its soulful melodies and infectious rhythms. However, Detroit is also associated with the birth of Techno music, a genre that emerged in the late 1980s and has since become a global phenomenon. Motown and Techno are two distinct musical styles, but both have their roots in the city of Detroit, making it a true musical powerhouse.

Also → Indianapolis: The Unconventional City on the White River

10. A Sports Capital of the Midwest

Detroit is a true sports capital of the Midwest, ranking third in championships behind only New York and Boston. This impressive feat is a testament to the city's long-standing commitment to sports, with teams like the Detroit Tigers, Detroit Lions, and Detroit Red Wings all having won multiple championships over the years. Detroit's sports legacy is further cemented by the presence of iconic venues like Comerica Park, Ford Field, and Little Caesars Arena, which have hosted some of the most memorable sporting events in history.

Also → Buick: One of the oldest automobile companies in the United States


is a former American basketball player who played professionally for the Detroit Pistons, Orlando Ma


Is a state located in the eastern part of north-central US.


is a long-distance running event that is usually run as a road race.

Short about Detroit
Is Michigan Stateâs largest city and the seat of Wayne County.