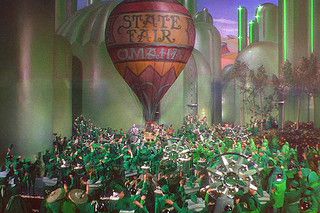 Fact 1
Omaha is located on the Missouri River in the Midwestern region of the United States. It is the largest city in the state of Nebraska.

Fact 2
In 1804 the Lewis and Clark Expedition passed through the river banks of what was to become Omaha.

Fact 3
Because of its central location, the city soon became a vital national transportation hub.

Fact 4
The First National Bank headquarters is located in this city and is known as the largest building between Chicago, IL and Denver, CO.

Fact 6
The NCAA College World Series has been held in the city of Omaha for more than fifty years till date.

Fact 7
The Henry Doorly Zoo in Omaha is known for having the largest indoor rainforest in the world.

Fact 10
The original settlers in Omaha were various Native American tribes. The word Omaha translates to âDwellers on the bluffâ,


is the capital of the State of Nebraska, after Omaha

Short about Omaha
Is a US city located in the state of Nebraska.