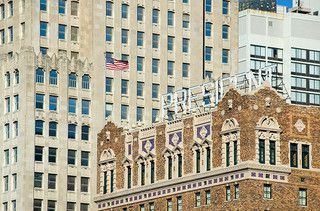 Fact 1
It is the predominant city of a metropolitan area of more than two million people spanning the MissouriâKansas border.

Fact 2
The city is well known for its contributions to the musical styles of jazz and blues as well as to cuisine, notably Kansas City-style barbecue.

Fact 4
It is officially nicknamed the City of Fountains.

Fact 5
In March 2012, downtown Kansas City was selected as one of America's best downtowns by Forbes magazine for its rich culture in arts, numerous fountains, upscale shopping and various local cuisineâmost notably barbecue.

Fact 6
With over 200 fountains, the city claims to have the second most in the world, just behind Rome.

Fact 7
The city also has more boulevards than any other city except Paris and has been called âParis of the Plainsâ.

Fact 8
Kansas City was founded in 1838 as the Town of Kansas.

Fact 9
The city was the location of several battles during the Civil War, including the Battle of Westport.

Fact 10
It is also known as âThe Soccer Capital of Americaâ.


is the capital city of the State of Kansas and the county seat of Shawnee County.


is a retired professional football player, a hall of fame quarterback with the San Francisco 49ers and Kansas City Chiefs.


A city and special comune of Italy.

Short about Kansas City
is the largest city in the U.S. state of Missouri