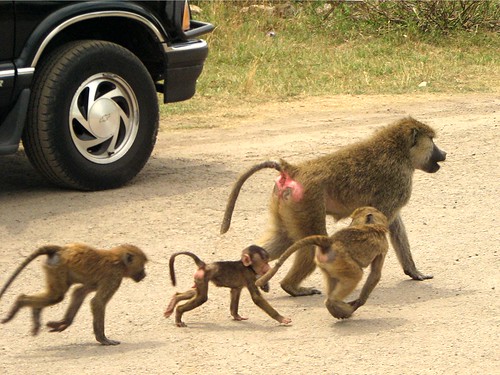 Baboons are highly aggressive primates, often causing harm to both domestic animals and people. With their large size and intimidating facial features, it's no wonder why they are seen as mean. They have a long muzzle, large canine teeth, and a patch of hairless skin on their rumps, which can range in color from pink to bright red. Baboons are also known to be very loud, with their loud barks and screams often heard from miles away.

Baboons are primates that lack the prehensile tails that other primates use to grip and climb, so they spend more time on the ground than their tree-dwelling counterparts. This means that baboons are more likely to be seen foraging for food on the ground, rather than in the trees. As a result, baboons have adapted to their environment by developing a more terrestrial lifestyle, which includes walking on all fours and using their hands to manipulate objects.

Also → The Evolution of Human Sleep

Baboons are highly adaptable primates that can be found in a variety of habitats, from arid deserts to lush forests. They are most commonly found in savannas, steppes, and other open areas, where they can forage for food and interact with other members of their troop. They are also known to inhabit wooded areas, where they can find shelter from the elements and predators. Baboons are highly social animals, and they live in large troops of up to several hundred individuals.

Also → Leopards: The Fastest Hunters in the Jungle

4. Baboons Survive on a Varying Diet to Live a Long and Healthy Life

Baboons are long-lived primates, with an average lifespan of around 30 years. Their diet is mainly composed of leaves, barks, and sap from plants, but they also supplement their diet with small amounts of fish and shellfish, hares, birds, vervet monkeys, and even small antelopes. This varied diet helps them to survive in their natural habitats, and provides them with the necessary nutrients to live a long and healthy life.


5. Female baboons are smaller than their male counterparts

6. The Social Structure and Behavior of a Complex Species

A baboon's social structure is complex and fascinating. A group of baboons is known as a troop, cartload, flange, or congress, and these groups can range in size from just a few individuals to hundreds of baboons. Each troop is made up of several different types of baboons, including adult males, adult females, juveniles, and infants. The adult males are the dominant members of the troop and are responsible for protecting the group from predators. The adult females are the primary caregivers for the young baboons, while the juveniles and infants are dependent on the adults for food and protection.

Baboons have a unique adaptation that allows them to sit comfortably for long periods of time: their bottoms are equipped with thick padding. This padding is much thicker than that of other primates, providing a cushion that allows them to sit comfortably for extended periods of time. This adaptation is especially useful for baboons, as they spend much of their time sitting in trees or on rocks, surveying their surroundings.

Male baboons are incredibly attentive to the females they wish to mate with, engaging in activities such as grooming, vocalizing, and touching, as well as providing them with food. After a gestation period of around six months, the female baboon will give birth to a single infant, which she will carry close to her stomach as she travels, holding it in one hand. This is a remarkable display of maternal care and protection, and is a testament to the strong bond between mother and child.

Baboons are incredibly expressive animals, with an impressive range of vocalizations that include screams, grunts, barks, smacking their lips, shrugging their shoulders, and even yawning. In total, they have 30 different ways of communicating with each other, making them one of the most complex primates in terms of communication.

Baboons are highly social animals, living in groups of around 50 individuals. These groups are made up of twice as many females as males, and the baboons interact with each other in a variety of ways, such as grooming, playing, and foraging for food. Baboons are also known to form strong social bonds with one another, and they often stay in the same group for their entire lives.

Short about Baboons
Are closely related to humans and possess nearly 91% of the same DNA.