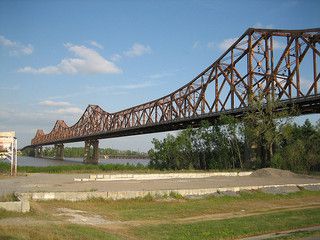 1. Baton Rouge, Louisiana: The City with an Interesting Origin Story

The city of Baton Rouge, Louisiana, has an interesting origin story. Its name, which translates to "red stick" in French, comes from the blood-soaked poles that were used by the native people in various rituals. These poles, which were used to hang bear heads and fish, were discovered by French explorers. This unique name is a reminder of the city's rich history and the culture of the people who lived there before it was colonized.


2. The Importance of Baton Rouge to International Trade

Baton Rouge is a major port city located on the Mississippi River, and is the farthest port upstream that is capable of accommodating Panamax ships. These ships, which measure up to 965 feet in length and 106 feet in width, are the largest vessels able to pass through the Panama Canal. As such, Baton Rouge is an important hub for international trade, allowing goods to be transported from the Gulf of Mexico to the rest of the world.

3. The Bridge that Changed Baton Rouge

Baton Rouge is a bustling port city today, thanks to the bridge built across the Mississippi River under the direction of Governor Huey Long. This bridge was designed to be low enough that large tankers could not make their way up-river, allowing the port to remain a hub of activity. The bridge has been a major factor in the city's growth and development, and has helped to make Baton Rouge a major port city in the region.

4. The Ninth-Largest Port in the United States

Baton Rouge is home to the ninth-largest port in the United States, with an impressive shipped tonnage of over 100 million tons annually. This bustling port is a major hub for the transportation of goods and services, and is a vital part of the local economy. It is also a major contributor to the state of Louisiana's economy, providing jobs and economic growth to the region.


5. The Capitol Building in Baton Rouge

The city of Baton Rouge is home to a stunning Neo-Gothic-style Capitol building, designed by the renowned architect James Daikin. This impressive structure features crenellations, turrets and stained glass, reminiscent of a medieval cathedral. Daikin's design is sure to leave visitors in awe of its grandeur and beauty.

The State Capitol Building in Baton Rouge is a sight to behold, standing tall as the tallest Capitol Building in the United States. Its impressive height of 450 feet is made even more impressive by its unique architecture, which features a dome that is covered in 23-karat gold leaf and a grand staircase that leads up to the entrance. The building also houses the Louisiana State Legislature, making it a hub of political activity in the city.

7. Tiger Stadium: The Most Intimidating Place to Play in the Country

The Tiger Stadium in Baton Rouge, Louisiana, is one of the most intimidating places to play in the country. With a capacity of 102,321, it is the sixth largest on-campus stadium in the United States. Nicknamed 'Death Valley', the stadium is renowned for its passionate and raucous atmosphere, making it a daunting place for opposing teams.

Also → The Tallest Building in Texas

The Myrtles Plantation in Baton Rouge, Louisiana is renowned for its paranormal activity and has been featured on National television. It is now a popular destination for visitors, who come to experience the haunted atmosphere and spend the night in the historic inn and restaurant. Many people have reported strange occurrences, such as unexplained noises, apparitions, and objects moving on their own. Whether you believe in the supernatural or not, the Myrtles Plantation is sure to provide a unique and unforgettable experience.

For over 50 years, The Pastime pizza parlor in Baton Rouge has been serving up its famous Boudin Pizza. This unique dish combines the city's signature boudin sausage with a classic pizza, creating a delicious combination of flavors that has kept locals coming back for generations. Whether you're a long-time resident or just visiting, The Pastime is the perfect place to experience the unique tastes of Baton Rouge.

10. The LSU Rural Life Museum: A House Museum with a History

The LSU Rural Life Museum in Baton Rouge is a house museum that has been restored to its former glory, and now holds a variety of memorabilia from Louisiana's past. Nine different Louisiana Governors have called this house home, and visitors can now explore the history of the state through items such as Jimmy Davis' guitar and Huey Long's pajamas. It's a great way to learn more about the state's past and the people who have shaped it.

Also → The Port of Tampa: A Major Hub for Cargo and Cruise Ships