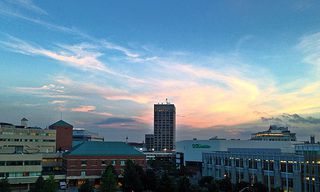 1. A City of Opportunity

As the second largest city in Massachusetts, Worcester is a bustling metropolis that offers a wealth of opportunities for its residents. With a population of over 180,000, Worcester is a vibrant and diverse city that is home to a variety of businesses, educational institutions, and cultural attractions. From its renowned colleges and universities to its thriving arts and entertainment scene, Worcester is a city that has something for everyone. With its close proximity to Boston, Worcester is an ideal destination for those looking to experience the best of both worlds.

Also → The Birth Control Pill Was Developed in Worcester, Massachusetts


2. Worcester, Massachusetts - The Heart of the Commonwealth

The city of Worcester is affectionately referred to as the "Heart of the Commonwealth" due to its prominent role in the state of Massachusetts. This is reflected in the city's official symbol, which is a heart, and serves as a reminder of the city's importance to the state. Worcester is home to a number of historical sites, including the Worcester Art Museum, the Worcester Historical Museum, and the American Antiquarian Society, all of which are important to the state's history and culture.

Also → Boston: The Birthplace of the American Revolution

3. Quinsigamond: A Place of History and Tradition

The area now known as Worcester was originally inhabited by the Pakachoag Indians, who named it Quinsigamond, meaning "a great place to fish for pickerel" in their language. This name was chosen due to the abundance of pickerel in the nearby Quinsigamond River, which provided a plentiful source of food for the Pakachoag people.

4. A History of Change

In 1673, a small group of English settlers established a settlement in Worcester, Massachusetts. Unfortunately, their homes were destroyed during the King Philip's War in December of 1675, leaving many of the inhabitants dead or displaced. However, in 1684, more settlers arrived and petitioned to change the name of the settlement, thus beginning the history of Worcester as we know it today.


5. Worcester, Massachusetts: A City with a History

In 1722, the city of Worcester was officially incorporated and named after a historic township in England. This township, which dates back to the 11th century, was known for its rich history and culture, and the city of Worcester has since adopted many of its traditions. Today, Worcester is a vibrant city with a population of over 180,000 people, and is home to a variety of attractions, including the Worcester Art Museum, the EcoTarium, and the Worcester Historical Museum.

6. Worcester's Role in the Revolutionary War

During the Revolutionary War, Worcester, Massachusetts was an essential munitions depot, supplying the Continental Army with the weapons and ammunition they needed to fight for independence. The city was a major hub for the production and storage of arms, and its strategic location made it a key target for the British. Worcester's role in the war was so important that it was the site of the first battle of the war, the Battle of Lexington and Concord, and the last battle of the war, the Battle of Worcester.

7. Worcester, Massachusetts: The Birthplace of the Industrial Revolution

Worcester, Massachusetts was a major player in the Industrial Revolution in the United States, thanks to its pioneering spirit in commerce and industry. The city was home to a number of innovative businesses, such as the first American steel mill, the first American machine shop, and the first American cotton mill. Worcester also played a key role in the development of the American railroad system, with the first locomotive built in the city in 1835. The city's legacy of innovation and industry continues to this day, with a thriving economy and a vibrant business community.

Esther Howland, a woman from Worcester, Massachusetts, is credited with creating the first American valentine cards. Howland, who was born in 1828, was inspired by the English valentines she had seen and decided to create her own. She used lace, ribbons, and colorful pictures to create her cards, which were sold in her father's stationery store. Her cards were so popular that she eventually opened her own business, the New England Valentine Company, which was the first of its kind in the United States. Howland's cards are still popular today, and her legacy lives on as a reminder of the power of love.

Also → Hartford: A City of History

The city of Worcester, Massachusetts is home to the oldest musical festival in the United States. Established in 1858, the Worcester Music Festival has been delighting audiences for over 160 years with its diverse range of musical performances. From classical to jazz, folk to rock, the festival has something for everyone. It is held annually in the summer and features a variety of concerts, recitals, and workshops. The festival is a great way to experience the rich musical culture of Worcester and to celebrate the city's long history of music.


An English actress who played the memorable Hermione in the Harry Potter series.