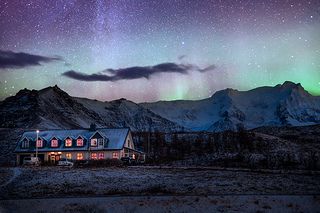 In Iceland, Christmas is celebrated with a unique twist - instead of just one Santa Claus, they have 13! These 13 Santas, known as the Yule Lads, are said to descend from the mountains each year to bring gifts to children who have been good. Each of the Yule Lads has a distinct personality and is associated with a particular type of gift, ranging from small treats to useful items. The Yule Lads are a beloved part of Icelandic culture, and their arrival is eagerly anticipated by children and adults alike.

Also → Tonga: A Small Island Nation With a Big Fishing and Tourism Industry


2. Iceland's Fishing Industry: A Country with a Bright Future

Iceland is a country whose economy is heavily reliant on fishing and fish processing. This is due to the abundance of fish in the surrounding waters, which has allowed the country to become a major player in the fishing industry. Fishing and fish processing is the main economic activity in Iceland, accounting for around 80% of the country's exports and providing employment for around 10% of the population. This has enabled Iceland to become one of the world's leading exporters of seafood, with a wide variety of fish products being exported to countries around the world.

Iceland is home to the deepest lake in the country, Oskjuvatn, which plunges to a depth of 220 meters. This lake is located in the central highlands of Iceland, and is the second largest lake in the country. It is fed by numerous rivers and streams, and is surrounded by mountains and glaciers. Oskjuvatn is a popular destination for fishing, swimming, and kayaking, and is a great spot for nature lovers to explore.

4. Iceland's Unusual Forest: A Land of Mosses, Lichens, and Wildflowers

Iceland is a stunningly beautiful country, but it is surprisingly sparsely forested. In fact, only 1% of the entire country is covered with trees. This is due to the fact that Iceland is a volcanic island, and the harsh climate makes it difficult for trees to survive. Despite this, Iceland is home to a variety of unique and diverse plant life, including mosses, lichens, and wildflowers.

Also → The Vikings: Explorers of the World


5. The Wonders of Iceland's Birds

Iceland is home to an impressive 270 species of birds, making it a paradise for birdwatchers. From the majestic gyrfalcon to the tiny snow bunting, the variety of birds in Iceland is truly remarkable. With its diverse habitats, from coastal areas to mountains and glaciers, Iceland provides a unique opportunity to observe a wide range of species in their natural environment. Whether you're a beginner or an experienced birder, Iceland is sure to provide an unforgettable experience.

6. HvannadalshnjÃºkur: The Highest Mountain in Iceland

Standing tall at an impressive 2,119 meters, HvannadalshnjÃºkur is the highest mountain in Iceland. Located in the ÃrÃ¦fasveit region of the country, the peak is part of the VatnajÃ¶kull National Park and is a popular destination for hikers and climbers. The mountain is also home to a number of glaciers, including the KvÃ­Ã¡rjÃ¶kull and the FjallsjÃ¶kull, and is surrounded by a number of other peaks, including the KristÃ­nartindar and the HrÃºtfjallstindar.

7. The Long and winding road to beer freedom in Iceland

Until March 1989, Iceland was a country where beer was strictly prohibited. This ban had been in place for over 75 years, since 1915, when the country's government passed a law prohibiting the sale and consumption of all alcoholic beverages. This ban was finally lifted in 1989, allowing Icelanders to enjoy a cold beer after more than three-quarters of a century.

In 1413, Iceland was an innovative nation, as it used dried fish as a form of currency. This was a unique form of money, as it was not only a valuable commodity, but also a practical one, as it could be stored for long periods of time without spoiling. This allowed Icelanders to trade goods and services without the need for coins or paper money. The dried fish was also a symbol of the country's rich fishing industry, which has been a major part of the Icelandic economy for centuries.

Also → The Stunning Lake of Chad: A Natural Wonder of the World

9. The Longest-Running Parliament in the World

Iceland is home to the world's oldest surviving parliamentary body, the Althing. Established in 930 AD, the Althing is a unicameral legislature that has been in continuous operation for over 1,000 years. It is the oldest parliament in the world and is a symbol of Iceland's long-standing commitment to democracy and self-governance. The Althing is responsible for enacting laws, approving the national budget, and electing the president of Iceland.

Iceland is a truly unique place, as it was one of the last places on earth to be inhabited by humans. It is believed that the first settlers arrived in Iceland around 874 AD, and since then the country has gone through a remarkable transformation. Today, Iceland is a modern, vibrant nation with a population of over 360,000 people. It is home to some of the most stunning natural landscapes in the world, including glaciers, volcanoes, geysers, and hot springs. Iceland is also known for its rich cultural heritage, with a strong emphasis on literature, music, and art. With its stunning landscapes, vibrant culture, and fascinating history, Iceland is a truly remarkable place to explore.


Is a landlocked mountainous country in the Lesser Caucasus Mountains, Eurasia, bordered by Turkey, G


Is an East African country officially known as the United Republic of Tanzania.


is a mountainous landlocked country in Central Asia.


Is a landlocked country situated in the southern part of the Balkan Peninsular bordered by Kosovo, S

Short about Iceland
is a European island country located in the North Atlantic Ocean.