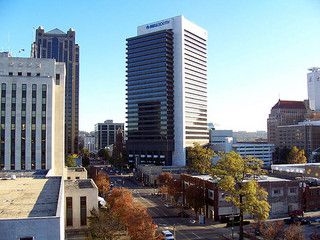 Birmingham, Alabama is the county seat of Jefferson County, making it the administrative center of the county. Located in the north-central part of the state, Birmingham is the most populous city in the state and the second-most populous city in the southeastern United States. It is home to a number of major corporations, universities, and cultural institutions, and is a major hub for transportation, industry, and commerce.

Birmingham, Alabama, was founded in 1871 and quickly became a major industrial hub of the South. Throughout the first half of the 20th century, the city was a powerhouse of production, with its steel mills, iron foundries, and coal mines providing the raw materials for a wide range of industries. By the end of the 1960s, Birmingham had become one of the most important industrial cities in the region, with its factories and mills producing everything from automobiles to textiles.

3. The History of Birmingham, Alabama

At the start of the 20th century, Birmingham experienced a period of substantial growth, earning it the nickname "The Magic City". This growth was evident in the downtown area, which developed from a low-rise commercial and residential district into a bustling grid of neoclassical mid-rise and high-rise buildings, as well as the introduction of busy streetcar lines. This period of growth and development was a major factor in the city's transformation into the vibrant metropolis it is today.

In the 1950s and 1960s, Birmingham, Alabama was thrust into the spotlight as a major hub of the civil rights movement. This period saw a number of significant events, such as the Birmingham Campaign of 1963, which saw thousands of African-Americans peacefully protesting for their rights, and the infamous bombing of the 16th Street Baptist Church, which killed four young girls and shocked the nation. These events, and the many others that took place in Birmingham during this time, helped to bring the civil rights struggle to the forefront of the national conversation and ultimately led to the passage of the Civil Rights Act of 1964.


5. A Vibrant City with a Rich Cultural History

Birmingham is a vibrant city, renowned for its cultural and entertainment offerings. Home to the largest art museum in the Southeast, the Birmingham Museum of Art, the city is a hub of creativity and artistry. With numerous art galleries in the area, visitors can explore a wide range of works from local, national, and international artists. From sculptures to paintings, photography to installations, Birmingham is the perfect destination for art lovers.

Also → Timothy Dalton: From RADA to the Birmingham Repertory Theatre

Birmingham is a cultural hub in Alabama, boasting the state's major ballet, opera, and symphony orchestra companies. The Alabama Ballet, Alabama Symphony Orchestra, and Opera Birmingham all call the city home, providing residents and visitors alike with a variety of performances to enjoy. From the graceful movements of the ballet to the powerful sounds of the symphony, Birmingham is a great place to experience the arts.


8. Birmingham, Alabama: A City of Flowers

Birmingham, Alabama is known for its humid subtropical climate, with hot summers, mild winters, and plenty of rainfall throughout the year. The average temperature in the summer months is around 80Â°F, while the winter months average around 50Â°F. The city receives an average of 56 inches of rain annually, making it one of the wettest cities in the United States. Birmingham's climate is ideal for growing a variety of plants and flowers, making it a popular destination for gardeners and nature lovers alike.

Also → Greensboro: A Vibrant City with a Thriving Arts Scene

9. Birmingham, Alabama: A Great Place to Live and Work

Birmingham, Alabama is a great place to live and work. The metropolitan area has been consistently rated as one of the best places to work and earn a living in the United States, thanks to its competitive salary rates and low cost of living. In fact, the area's median household income is higher than the national average, while the cost of living is significantly lower. This makes Birmingham an attractive option for those looking to make a good living while still being able to afford a comfortable lifestyle.

10. Tracy Lawrence and Ken Mellons' versions of "Paint Me a Birmingham"

The country music scene was rocked when Tracy Lawrence and Ken Mellons both released their own versions of the song "Paint Me a Birmingham". This song, which was written by Tim Mensy and Gary Harrison, is a tribute to the city of Birmingham, Alabama, and its rich history and culture. Both Lawrence and Mellons' versions of the song have become popular among country music fans, and it has become a staple of their respective repertoires.


is the capital and largest city of the U.S. state of Mississippi.

Short about Birmingham
is the largest city in Alabama