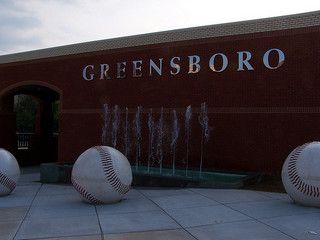 
2. The Saura Legacy Lives On in Greensboro

When Europeans first encountered the area that would become Greensboro, they found it inhabited by the Saura, a Siouan-speaking people. The Saura were a hunter-gatherer society, living off the land and relying on the resources of the area for their sustenance. They were known for their skill in crafting tools and weapons from stone, bone, and wood, and for their knowledge of medicinal plants. The Saura were also known for their intricate basket-weaving and pottery-making techniques. The Saura were eventually displaced by European settlers, but their legacy lives on in the city of Greensboro.

3. A Beautiful City in the Piedmont Region

Greensboro, North Carolina is a beautiful city nestled among the rolling hills of the Piedmont region. It is conveniently located halfway between the majestic Blue Ridge and Great Smoky Mountains to the west and the stunning Atlantic beaches and Outer Banks to the east. With its picturesque landscape and close proximity to both mountain and beach attractions, Greensboro is the perfect destination for those looking to explore the best of North Carolina.

Greensboro, located in the southeastern United States, enjoys a humid subtropical climate with four distinct seasons. Summers are hot and humid, with temperatures often reaching the mid-90s, while winters are mild, with temperatures rarely dropping below freezing. Spring and fall are pleasant, with temperatures ranging from the mid-50s to the mid-70s. The area receives an average of 48 inches of rain annually, with the most rain occurring in the summer months.


5. Bicentennial Garden: A Peaceful Place to Reflect on American History

Greensboro, North Carolina is home to the Bicentennial Garden, a beautiful park that was developed in 1976 to commemorate the 200th anniversary of the United States. The garden features a variety of native plants, trees, and shrubs, as well as a pond, a fountain, and a gazebo. It is a popular spot for locals and visitors alike, offering a peaceful respite from the hustle and bustle of the city. The garden is also a great place to learn about the history of the United States, as it is filled with monuments and plaques that commemorate the bicentennial.

Greensboro, North Carolina is known as "Tournament Town" due to its reputation for hosting a wide variety of sports tournaments. From basketball to soccer, the city has hosted numerous tournaments for both amateur and professional athletes. In addition, the city has hosted several national and international tournaments, including the ACC Men's Basketball Tournament, the NCAA Women's Soccer College Cup, and the US Open Disc Golf Championship. With its commitment to providing a top-notch tournament experience, Greensboro has become a destination for athletes and sports fans alike.

Greensboro, North Carolina is home to a number of notable figures, including Emmy award-winning writer Rex M. Best, American Idol alumni Chris Daughtry and Fantasia Barrino, and best-selling author Nicholas Sparks. Best is a renowned screenwriter, having won an Emmy for his work on the television series "The Practice." Daughtry and Barrino both achieved success on the popular singing competition show "American Idol," with Daughtry finishing in fourth place in the show's fifth season and Barrino winning the show's third season. Sparks is a prolific author, having written numerous best-selling novels such as "The Notebook," "A Walk to Remember," and "The Last Song." All three of these individuals have made Greensboro proud with their accomplishments.

9. A Vibrant City with a Thriving Arts Scene

Greensboro is a vibrant city with a thriving arts scene. From the renowned Greensboro Symphony Orchestra to the Greensboro Ballet, the city is home to a wide variety of performing arts organizations. Additionally, the city is home to numerous galleries, museums, and other cultural institutions, such as the Weatherspoon Art Museum, the Greensboro Cultural Center, and the International Civil Rights Center and Museum. With its diverse and active arts community, Greensboro is a great place to experience the arts.

Also → Fayetteville, North Carolina: A City with a Rich History

Greensboro, North Carolina is home to the Eastern Music Festival, an annual event that brings together over 100 performances from a variety of genres. Professional and talented students from all over the world come to Greensboro to showcase their symphonic works, chamber music, and recitals. This event is a great opportunity for music lovers to experience a wide range of musical styles and to appreciate the talent of these young musicians.


Is located in North Carolina and is also the county seat of Durham County.

Short about Greensboro
is a city in the U.S. state of North Carolina.