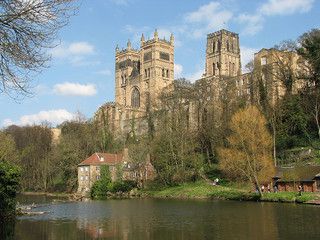 Durham, North Carolina was named after Dr. Bartlett Snipe Durham, who owned extensive pieces of land in the area that is now the downtown area. Dr. Durham's family name has been immortalized in the town's name, a lasting reminder of his legacy in the area.

Durham is home to the world's toughest bridge, the Train Trestle Bridge. Standing at an impressive 11 feet and 8 inches tall, it has proven to be a challenge for even the largest of trucks and over-sized vehicles, with many accidents occurring at the bridge. Despite its difficulty, the bridge remains a popular attraction in Durham, drawing visitors from all over the world.

4. N.C. Central U: A History of Education for African Americans

Durham, North Carolina is home to North Carolina Central University, the country's first historically black educational institution to be publicly supported. Founded in 1910, the university has a long and proud history of providing educational opportunities to African Americans, and has since grown to become a major research university. With a student body of over 8,000, NCCU offers a wide range of degree programs, from undergraduate to doctoral, and is a leader in the fields of law, business, and the sciences.

Also → Shaw University: A History of Hope and Opportunity

The city of Durham, North Carolina is aptly nicknamed the City of Medicine, as it is home to over 300 health-related and medical companies and medical practices. From pharmaceutical companies to medical research facilities, Durham is a hub of medical innovation and progress. With a wide range of medical services and resources, Durham is a leader in the medical field and a great place to receive medical care.

Durham, North Carolina is home to an impressive 96,000 acres of evergreen and hardwood forests, including the only surviving ancient Piedmont Bottomland forests in the area. These forests are a unique and important part of the city's natural landscape, providing a habitat for a variety of wildlife and offering a peaceful retreat for outdoor enthusiasts. The Piedmont Bottomland forests are especially noteworthy, as they are the only remaining examples of their kind in the region.

7. Keeping Your bearings in Durham

Driving around Durham can be a bit of a challenge, as the numbers and names of roads can change without warning. This is especially true in certain areas of the city, where roads may be renamed or renumbered without prior notice. To make sure you don't get lost, it's important to stay up to date on any changes to the roads in the area.

The roads of Durham, North Carolina, can be confusing to navigate, as they are referred to by a variety of different names. Some roads are simply numbered, while others are named after individuals as a tribute. This memorial naming system is used to honor individuals who have made a significant contribution to the city.

Also → Fayetteville, North Carolina: A City with a Rich History

Durham's Bullock's BBQ is a city landmark and the oldest continuously operating restaurant in the city, having been in business for an impressive 58 years. What's more, it has consistently achieved an A rating in its health inspections, a testament to its commitment to providing quality food and service.

10. Durham, North Carolina: A City with a History of Civil Rights Activism

Durham, North Carolina, is a city with a rich history of civil rights activism. In 1957, it was the site of the first sit-in of the Civil Rights Movement, when seven people, led by Dr. Pauli Murray and Joseph McNeil, gathered at the city's church to plan a protest. This protest was the first of many that would eventually lead to the desegregation of public spaces and the end of Jim Crow laws. The city of Durham continues to honor this legacy of civil rights activism, and is a beacon of hope for those who strive for justice and equality.

Short about Durham
Is located in North Carolina and is also the county seat of Durham County.