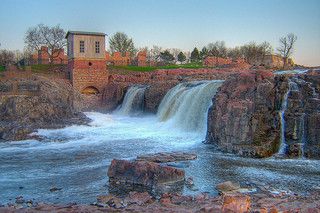 Sioux Falls is a city with a fascinating history that dates back to the last ice age, some 14,000 years ago. The city's namesake, the Big Sioux River, is home to a series of cascades that were created during this period. These cascades have been a source of beauty and power for the city ever since, and have been integral to the development of Sioux Falls.


2. The Hottest City in the Midwest

Sioux Falls, located in the Midwest of the United States, is known for its humid continental climate. This climate is characterized by hot summers and cold winters, with temperatures ranging from an average high of 86Â°F in July to an average low of 8Â°F in January. Precipitation is abundant throughout the year, with an average of 28 inches of rain and snowfall combined. The city also experiences a wide range of humidity levels, with an average of around 70%.

3. A Financial Hub with No State Corporate Income Tax

Sioux Falls is a thriving financial hub, thanks in part to its lack of a state corporate income tax. This has attracted a number of financial companies to the city, making it a great place to do business. Companies such as Citibank, Wells Fargo, and U.S. Bank have all established a presence in Sioux Falls, providing a wide range of services to the local community. With its low taxes and strong business environment, Sioux Falls is an ideal location for financial companies looking to expand their operations.

The city of Sioux Falls, South Dakota, has three international sister cities: Potsdam, Germany; Newry and Mourne District Council, Northern Ireland. This connection between Sioux Falls and these two cities has been established to promote cultural exchange and understanding between the three cities. Potsdam is a city in Brandenburg, Germany, located on the banks of the Havel River, and is known for its many parks and palaces. Newry and Mourne District Council is located in Northern Ireland and is known for its stunning landscapes, vibrant culture, and rich history. Through this sister city relationship, Sioux Falls has been able to foster a strong connection with these two cities, and to promote cultural understanding and exchange between them.


5. The Best Place to Live in America: Sioux Falls

In 1992, Money Magazine named Sioux Falls "the best place to live in America" due to its thriving economy, low unemployment rate, and low crime rate. This recognition was a testament to the city's success, as it boasted a healthy economy, with businesses flourishing and citizens enjoying a high quality of life. Furthermore, the city's unemployment rate was significantly lower than the national average, and its crime rate was one of the lowest in the country. This combination of factors made Sioux Falls an ideal place to live and work.

Also → Sitting Bull: The Supreme Chief of the Sioux Nation

Sioux Falls was recognized twice by Allstate for its safe drivers, receiving the Allstate Safety Leadership Award in 2007 and 2008. On average, Sioux Falls residents experience an accident only once every 13.7 years, a statistic that earned the city the prestigious award. This impressive safety record is a testament to the responsible driving habits of Sioux Falls residents.

Sioux Falls, South Dakota, has been recognized for its financial responsibility, coming in second place on Men's Health Magazine's list of cities with the least debt in November 2007. The city was only narrowly beaten by Billings, Montana, for the top spot. This ranking is a testament to the city's commitment to fiscal responsibility and sound financial management.

Sioux Falls is a major health care hub in the region, offering a wide range of medical services. From primary care to specialized treatments, the city is home to a variety of hospitals, clinics, and medical centers. With its state-of-the-art facilities and highly trained staff, Sioux Falls is a leader in providing quality health care to the surrounding area. From emergency services to long-term care, the city is committed to providing the best possible care to its residents and visitors.

9. The Perfect Place to Shop and Dine

Sioux Falls, located in South Dakota, has become a major hub for shopping and dining due to its distance from larger cities. With a population of over 180,000, Sioux Falls is the largest city in the state and is situated in the Great Plains region of the United States. The city is home to a variety of shopping centers, restaurants, and entertainment venues, making it a popular destination for locals and visitors alike. With its convenient location and wide range of amenities, Sioux Falls is an ideal spot for those looking to enjoy a day of shopping and dining.

Sioux Falls has been named the #1 Best Small Place For Business And Careers by Forbes for an impressive five consecutive years, from 2005 to 2009. This accolade is a testament to the city's commitment to providing a thriving business environment, with a range of opportunities for entrepreneurs and career-seekers alike. Sioux Falls has consistently demonstrated its dedication to creating a supportive and prosperous atmosphere for businesses and individuals alike, making it a great place to live and work.


Montana is a state located in the Western United States.

Short about Sioux Falls
is the largest city in the US state of South Dakota.