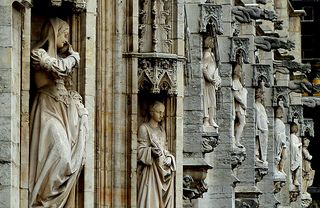 Fact 1:
As a federal state located in western Europe, Belgium is officially called the Kingdom of Belgium.

Fact 2:
Belgium is the European Union's founding member and it acts as its headquarters.

Fact 4:
Belgium was nicknamed the "cockfighting arena of Europe" due to the fact that many of the wars between the various powers in Europe fought in Belgium.

Fact 6:
Due to the excesses taken by Germany, the beginning months of this war was known as the "Rape of Belgium".

Fact 8:
Within Belgium, there are three different regions with some being divided into provinces.

Fact 10:
Belgium is bordered by Germany, Luxembourg, France, and the Netherlands.


is a prolific Belgian (Flemish) movie and stage actor


A cultivar in the group of cabbages that is known for its edible bud.

Short about Belgium
Is a federal state in Western Europe.