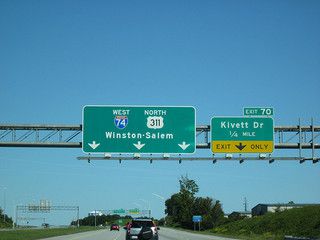 
2. The City of Arts and Innovation

WinstonâSalem, popularly known as the âTwin Cityâ due to its hyphenated name, is a vibrant city dedicated to the arts and innovation. It is home to a thriving theater and fine arts scene, as well as a hub for technological research. This has earned it the nickname of the âCity of Arts and Innovationâ. WinstonâSalem is a city that celebrates creativity and encourages exploration.

3. The Camel City: A History and Legacy of WinstonâSalem

WinstonâSalem, also known as the "Camel City", is a city with a rich history. It is named after the two towns of Winston and Salem, which were merged in 1913. The city is most famously known for the production of Camel cigarettes by the local R.J Reynolds Tobacco Company. This has earned WinstonâSalem the nickname of the "Camel City" and has been a major part of the city's identity for many years.

4. Winston, Forsyth County, and the Founding of a City

In 1849, Joseph Winston, a local hero of the Revolutionary War, was honored with the founding of Winston, a city named in his honor. His fame had spread to Salem, and shortly after Winston's founding, the two cities merged to form Forsyth County. This union of Winston and Salem created a vibrant community that has endured for over 170 years.

In 1889, the post offices of Winston and Salem were combined, but it wasn't until 1913 that the two cities officially merged. This merger marked the beginning of WinstonâSalem, a city that has since become a major hub for business, culture, and education in North Carolina. The city is home to several universities, including Wake Forest University, Winston-Salem State University, and Salem College, as well as a number of Fortune 500 companies. WinstonâSalem is also known for its vibrant arts and entertainment scene, with a variety of museums, galleries, and performing arts venues.

WinstonâSalem, North Carolina, was originally founded by German Moravians in 1766 and is still a thriving city today. The original settlement, now known as Old Salem, is a popular tourist destination and offers visitors a unique glimpse into the past. Old Salem is home to a variety of historic buildings, including the 18th-century Single Brothers House, the 1771 Gemeinhaus, and the 1766 Home Moravian Church. Visitors can also explore the historic gardens, take a guided tour, and learn about the city's rich history.

Also → Winston Churchill: A Man of Many Talents

7. The Wells Fargo Center in Winston-Salem

Standing at a towering height of 538 feet, the Wells-Fargo Center in WinstonâSalem is the tallest building in the region. Formerly known as the Wachovia Building, this impressive structure is a prominent feature of the city's skyline. It is home to a variety of businesses, including the headquarters of Wells-Fargo, and is a popular destination for locals and visitors alike.

Winston-Salem is the second largest municipality in the Piedmont Triad region, a metropolitan area in North Carolina that includes the cities of Greensboro and High Point. With a population of over 250,000, Winston-Salem is a vibrant city with a rich history and a diverse economy. It is home to several major universities, including Wake Forest University, Winston-Salem State University, and Salem College, as well as numerous cultural attractions, such as the Reynolda House Museum of American Art and the Southeastern Center for Contemporary Art. With its convenient location and abundance of amenities, Winston-Salem is an ideal place to live, work, and play.

9. The Legacy of the Safe Bus Company

In 1972, WinstonâSalem was home to the largest black-owned transit system in the world, the Safe Bus Company. Founded by private bus drivers, the company provided a vital service to the local community, connecting people to their places of work, education, and leisure. The Safe Bus Company was a testament to the entrepreneurial spirit of the African-American community in WinstonâSalem, and its legacy continues to this day.

10. Krispy Kreme: The History of an Iconic Treat

WinstonâSalem, North Carolina is home to the famous Krispy Kreme Doughnut. This iconic treat was invented in the city in 1937 by Vernon Rudolph, who purchased a secret yeast-raised doughnut recipe from a New Orleans chef. Rudolph began selling the doughnuts from his shop, and they quickly became a local favorite. The popularity of the doughnuts spread, and today, Krispy Kreme Doughnuts can be found in over 1,000 locations around the world.


Is an actress who is best known for her character role in the hit series âSex in the Cityâ.

Short about WinstonâSalem
Is the county seat of Forsyth County in North Carolina.