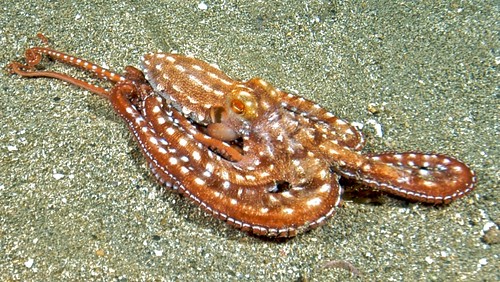 1. The Blue-Ringed Octopus Is One of the Most Venomous Creatures on Earth

The blue-ringed octopus is one of the most venomous creatures on the planet, capable of delivering a deadly dose of toxins that can kill up to 26 people in a matter of minutes. Despite their small size, these octopuses pack a powerful punch, with venom that is 1,000 times more potent than cyanide. Their signature blue rings are a warning sign to stay away, as their bite can cause paralysis, respiratory failure, and even death.


2. Fascinating creatures with a unique anatomy

Octopuses are fascinating creatures with a unique anatomy. They have two eyes, four pairs of arms or tentacles, and a large head or "mantle" with its mouth at the center point of the arms. What's more, they have three hearts - one for each of the two gills and one for the rest of the body. This allows them to pump blood more efficiently throughout their body, enabling them to move quickly and efficiently in their aquatic environment.

Octopuses are fascinating creatures that use their eight tentacles to move, grip slippery surfaces, and even taste their environment. Each tentacle is lined with hundreds of suction cups, which the octopus uses to explore its surroundings and search for food such as clams, fish, crayfish, and crabs. Not only do these suction cups help the octopus move, but they also allow it to grip slippery surfaces and taste its environment.

Octopuses are incredibly intelligent creatures, capable of navigating complex mazes and demonstrating long-term memory. In fact, studies have shown that octopuses can remember the location of food sources for up to four weeks, and can even remember how to solve a maze after being removed from it for a period of time. This remarkable intelligence has made them a popular subject of study for scientists, who are continually amazed by their cognitive abilities.


5. Octopuses are Amazing Creatures That Can Regenerate Lost Body Parts

Octopuses are incredibly adaptive creatures, able to squirt clouds of ink and change color to create camouflage in order to evade predators. In desperate situations, they can even sever their tentacles off and re-grow them later. This remarkable ability to regenerate lost body parts is a trait that is unique to octopuses and other cephalopods.

Octopuses have remarkable eyesight, with sensors that allow them to detect even the slightest changes in their environment. Their eyes are unique in that the slit remains horizontal, yet they are able to rotate their eyes to adjust to the orientation of whatever they are looking at. This remarkable ability allows them to see in all directions, giving them an advantage in their underwater environment.

7. The Largest and Shortest-Lived Creatures

Octopuses are fascinating creatures, with the largest species weighing up to 15 kg. Unfortunately, their life spans are relatively short, ranging from as little as six months to a maximum of five years. This means that they must reproduce quickly in order to ensure the survival of their species.

Female octopuses are truly remarkable creatures; they lay an astonishing 40,000 eggs at a time and then, after the eggs hatch and the young octopuses rise to the upper waters of the sea, the mother dies. This is a remarkable feat of maternal sacrifice, as the female octopus will not live to see her offspring grow and mature. Despite this, female octopuses are still able to ensure the survival of their species by laying such a large number of eggs.

Octopuses are fascinating creatures, possessing a unique trait that sets them apart from other animals: their blood is blue! This is due to a copper-rich protein found in their blood, and it's a trait that is shared by no other species. Unfortunately, octopuses are also deaf, meaning they rely on their other senses to survive in the wild.

10. Octopuses have the most complex nervous system of any creature

Octopuses are fascinating creatures due to their highly complex nervous system, which is made even more remarkable by the fact that they have no internal or external skeletons. This allows them to move in a variety of ways, including squeezing through tight spaces and changing their shape and color to blend in with their environment. Their nervous system is so complex that they can even learn to open jars and solve puzzles.

Short about Octopuses
Are invertebrates that are most closely related to squid and cuttlefish.