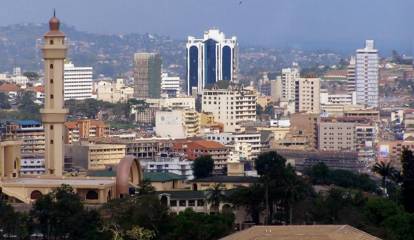 1. The Capital of Uganda

Kampala, the capital of Uganda, is a bustling city with an estimated population of 1,659,600 residents as of 2011. This population is made up of a diverse mix of cultures, religions, and languages, making Kampala a vibrant and exciting place to visit. The city is home to a variety of attractions, including the Uganda National Museum, the Uganda Wildlife Education Centre, and the Uganda Martyrs Shrine. Kampala is also a major commercial hub, with a bustling market and a variety of restaurants, bars, and shops. With its rich culture and vibrant atmosphere, Kampala is a must-visit destination for any traveler.

Also → Uganda: The Land of the Bundles

Kampala, the capital of Uganda, is unfortunately known for its high crime rate. Common crimes include pickpocketing, 'snatch and grab' thefts, and vehicle vandalism. Pickpocketing is a crime in which a thief steals items from a person's pocket or bag without them noticing. 'Snatch and grab' thefts involve a thief quickly taking an item from a person's hand or body and running away. Vehicle vandalism is the act of damaging or destroying a vehicle, such as breaking windows or slashing tires.

Kampala, the bustling capital of Uganda, is known as the 'City of Hills' due to its unique topography. It is said to have been built on seven hills, namely: Mengo Hill, Kibuli Hill, Namirembe Hill, Lubaga Hill, Old Kampala Hill, Nakasero Hill and Makerere Hill. Each of these hills has its own unique history and significance, and together they form the foundation of Kampala's rich culture and heritage.

4. Kampala, the capital of Uganda, has a long and storied history.

Kampala, the bustling capital of Uganda, has a long and storied history. Hundreds of years ago, it was the capital of the Bugandan Kingdom, a powerful subnational kingdom that was a major force in the region. This kingdom was a major cultural and political center, and its influence can still be seen in the city today. Kampala is a vibrant and diverse city, and its past as the capital of the Bugandan Kingdom is an important part of its identity.

Kampala, the capital of Uganda, is home to Makerere University, the country's largest and second-oldest higher institution of learning. Established in 1922, Makerere University has a long and distinguished history, and is renowned for its academic excellence and research capabilities. It is a major center of learning and culture in the city, and has produced some of Uganda's most influential leaders, thinkers, and innovators.

Kampala is home to one of the seven Baha'i Houses of Worship in the world, known as the Mother Temple of Africa. This majestic temple is a symbol of unity and peace, and stands as a beacon of hope for the African continent. It is a place of worship for the Baha'i faith, and is open to people of all backgrounds and beliefs. The temple is a beautiful sight to behold, with its white marble walls and golden dome, and is a reminder of the power of faith and unity.

Kampala, the capital of Uganda, experiences two distinct wet seasons each year. From August to December, the city is subject to a long rainy season, while a shorter rainy season occurs from February to June. During these times, the city is often blanketed in heavy rainfall, making it difficult to get around and enjoy the city's attractions. Despite this, Kampala is still a vibrant and exciting city to visit, with plenty of cultural and historical sites to explore.

Also → Edinburgh, the Most Beautiful City in the World

Kampala, Uganda's capital city, is the second largest industrial center in the country, following Jinja. It is a major exporter of goods such as coffee, cotton, tea, sugar, and tobacco, which are all produced in the city's many factories. These products are then shipped to other countries around the world, providing a significant source of income for the city and its citizens. Kampala is also home to a number of other industries, including textiles, food processing, and pharmaceuticals, making it an important economic hub in the region.

Also → Dhaka: The Capital of Bangladesh

In Kampala, Uganda, inter-tribal marriages are becoming increasingly more common, though they are still not widely accepted in the country. This is a significant shift from the traditional view of marriage in Uganda, which has historically been limited to members of the same tribe. As Kampala continues to grow and evolve, it is likely that inter-tribal marriages will become more accepted in the future.

When the King of Buganda first chose the area that would become Kampala, he intended it to be a hunting reserve. However, when the British arrived, they renamed it the 'Hills of Impala', in reference to the large population of antelope that roamed the area. This area was ideal for hunting, and the British saw it as an opportunity to take advantage of the abundance of wildlife. The name 'Kampala' was eventually adopted, and the city has since grown to become the capital of Uganda.


Is a landlocked East African country officially known as the Republic Of Uganda.


The capital and most populous city of the Hashemite Kingdom of Jordan.


The capital and largest city of Belarus.


Is a landlocked country in East/Central Africa, bordered by Uganda to north, Burundi in the south, D


The capital and largest city in Peru.


The capital and largest city of Ghana.

Short about Kampala
The capital and largest city in Uganda.