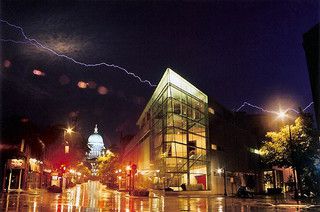 1. The State Capitol Building in Madison

The State Capitol building in Madison is an iconic landmark that stands out prominently against the city skyline. Its white domed structure is an impressive sight, and is so recognizable that it is used as a reference point for the entire city. It is a symbol of Madison's history and culture, and is a reminder of the city's importance in the state of Wisconsin.

Madison, Wisconsin is home to Michael Feldman, the renowned National Public Radio (NPR) personality. He is best known for his long-running radio show, Whad'ya Know?, which has been airing since 1985. Michael Feldman has become a beloved figure in Madison, and his show has become a staple of the city's culture.

3. Madison, Wisconsin: A City of Diversity and Legacy

Madison, Wisconsin is named after the fourth President of the United States, James Madison. Madison was a Founding Father of the United States and a key contributor to the Constitution. He was also a leader in the War of 1812 and served as Secretary of State under President Thomas Jefferson. Madison was a staunch advocate of individual rights and a strong believer in the power of the federal government. His legacy lives on in the city of Madison, which is a vibrant and diverse community that honors his memory.

The University of Wisconsin-Madison's "Badger" team is a source of state-wide pride, boasting a passionate and dedicated fan base. From the student section at Camp Randall Stadium to the tailgates in the parking lot, Badger fans show their support in full force. Whether it's a football game, basketball game, or any other sporting event, the Badger faithful are always there to cheer on their team.

Also → John Bardeen: The Man Who Invented the Transistor

Madison, Wisconsin is a city with a rich history, and it is particularly renowned for its connection to the world-famous architect, Frank Lloyd-Wright. During his teenage years, Wright lived in Madison, where he developed his passion for architecture and began to hone his craft. His time in Madison was formative for Wright, and it is no surprise that he went on to become one of the most influential architects of the 20th century.

The city of Madison is bordered by four large lakes, the names and meanings of which remain a source of debate. The lakes are known as Mendota, Monona, Waubesa, and Kegonsa, and each has its own unique history and origin story. Some believe that Mendota is derived from the Dakota word for "large lake," while others suggest it is a corruption of the French phrase "mendier l'eau," meaning "to beg for water." Monona is thought to be a corruption of the Ho-Chunk phrase "mÄnÄnÄ," meaning "beautiful lake." Waubesa is believed to be a combination of the Ho-Chunk words "waub" and "esa," meaning "little fox" and "water," respectively. Finally, Kegonsa is thought to be derived from the Ho-Chunk phrase "gÄÄkÄÄnÄÄsÄÄ," meaning "spring of water." Despite the ongoing debate, these four lakes remain an integral part of the Madison landscape.

7. A City Committed to Sustainability

Madison is a city that is committed to sustainability, with close to a hundred miles of biking pathways and a large number of bicyclists who are dedicated to making the city a greener place. The biking pathways are well-maintained and provide a safe and enjoyable way for cyclists to explore the city. The city also offers a variety of bike-friendly amenities, such as bike racks, bike lanes, and bike-sharing programs, making it easy for cyclists to get around. With its commitment to sustainability and its dedication to providing a safe and enjoyable biking experience, Madison is a great place for cyclists to explore.

The city of Madison, Wisconsin is home to two remarkable individuals: John Bardeen, the Nobel Prize-winning physicist who was the first person to win the Nobel Prize twice, and Eric Heiden, the Olympic gold medalist speed skater who won five gold medals at the 1980 Winter Olympics in Lake Placid. Both of these individuals have made a lasting impact on the city of Madison, and their accomplishments are a source of pride for the city's residents.

Also → Lynn Margulis: A Biologist Who Changed the Way We View Evolution

The city of Madison, Wisconsin is forever linked to the tragic death of Otis Redding, one of the world's greatest soul and blues singers. In 1967, Redding's plane crashed into Monona Lake, just one day before he was scheduled to perform at a nightclub near the University of Wisconsin. His untimely death left a lasting impact on the music industry, and his legacy lives on in the city of Madison.

The Wisconsin-Madison "Badgers" have a unique origin story. The name was inspired by the nineteenth century settlers who lived in the area. These settlers were known for their hardworking nature and their ability to dig and build homes in the rocky terrain. This hardworking spirit was reflected in the name "Badgers," which has been the mascot of the University of Wisconsin-Madison ever since.

Short about Madison
Is the capital of Wisconsin in the United States and is Dane Countyâs county seat.