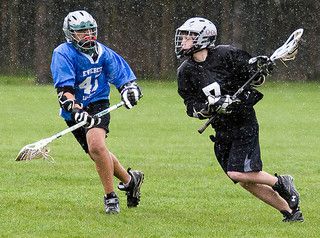 Fact 1:
Lacrosse is the fastest game to be played on two feet.

Fact 2:
Lacrosse is also one of the fastest growing sport in the United States.

Fact 3:
Native Americans are the ones who invented the game, yet the details about how it was played originally remains a mystery.

Fact 4:
The rules were created in 1794, when a game between the Seneca and Mohawks (tribes) was played.

Fact 5:
The first women's lacrosse game was played in Scotland, 1890.

Fact 6:
In summer of 1763, lacrosse was played by 2 tribes to distract British soldiers, in order to recapture Fort Michilimackinac (upper Michigan).

Fact 7:
Indian lacrosse was often played with big numbers of players; to the point that it reached from 100 to 1000 players.

Fact 8:
The game was originally used to toughen up young men for war, focusing also on the spiritual side.

Fact 9:
In the 1800âs the French started to play lacrosse which tended to âcivilizeâ the game a bit.

Fact 10:
The French, along with the natives were credited for setting the foundations of the game.


is a two-player strategy board game played on a chessboard, a checkered gameboard with 64 squares arranged in an eight-by-eight grid.


An online combat game made by Gaijin Entertainment.


An Atari 2600 game developed by Activision.


A shooter game developed by Activision for the Atari.

Short about Lacrosse
Is a team sport played using a small rubber ball and a long-handled stick.