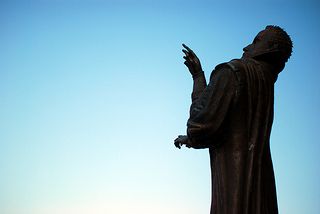 Fact 1
From1589-1592, Galileo Galilei taught in the city of Pisa. It is believed that the famous velocity experiment was conducted here. He dropped objects of varying weights off the leaning tower of Pisa to order to disprove Aristotleâs theory that lighter objects fall slower than heavier ones.

Fact 2
He was one of the first astronomerâs to observe sunspots and his first astronomical observations were published in 1610.

Fact 3
It was Galileo who discovered that in reality the Milky Way was not a nebula but closely-packed stars.

Fact 4
In 1611, Cardinal Barberini welcomed Galileo to Rome. Later when he became the pope their friendship took a toll. This happened primarily because the theories that Galileo taught opposed the sacred scriptures.

Fact 5
Galileo Galilei observed Neptune in conjunction with Jupiter in 1612. He was the first astronomer to do so. It was only 234 years later, in 1846, that Neptune was actually discovered.

Fact 6
He studied satellites and moon and many of them were named after him. His studies about these celestial bodies proved that the universe had more than one center. It also affirmed the fact that the sun was the center of our solar system.

Fact 7
In 1663 Galileo discovered that the moonâs surface had craters and mountains.

Fact 8
His discovery about the moon led to an interrogation. This resulted in him being put behind bars for three weeks at the Vatican. The church believed that all his discoveries went against Christian beliefs.

Fact 9
The heliocentric model that Galileo put forth opposed the Churchâs view and he had to withdraw several of his theories and spent the fag end of his life under house arrest.

Fact 10
There was a ban on reprinting most of Galileoâs works. It was over 60 years after the death of the genius in 1718 that his works were published.


is the eighth and farthest planet from the Sun in the Solar System.


was a French mathematician, physicist, inventor, writer and Christian philosopher


was an English astronomer, geophysicist, mathematician, meteorologist, and physicist who is best known for computing the orbit of the eponymous Halley's Comet

Short about Galileo Galilei
Was an Italian mathematician, physicist, philosopher and astronomer who played a prominent role in the Scientific Revolution.