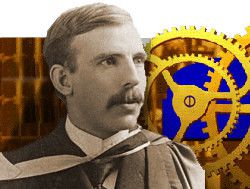 1. A Life in Science

Ernest Rutherford, one of the most influential scientists of the 20th century, was born on August 30th, 1871 in Brightwater, New Zealand. He went on to become a Nobel Prize-winning physicist and chemist, and is best known for his work in the field of radioactivity and nuclear physics. He passed away on October 19th, 1937 in Cambridge, UK, leaving behind a legacy of groundbreaking discoveries that continue to shape the world today.


2. The Father of Nuclear Physics

Ernest Rutherford is widely regarded as the 'Father of Nuclear Physics' and is one of the most influential experimentalists in history. He is credited with discovering the structure of the atom, the concept of radioactive half-life, and the development of the first nuclear reaction. His work laid the foundation for the development of nuclear energy and the atomic bomb. He was awarded the Nobel Prize in Chemistry in 1908 for his work in the field of radioactivity. His legacy continues to shape the world of physics today.

Ernest Rutherford was a brilliant student who achieved great success during his time at the Canterbury College, University of New Zealand. He was awarded a scholarship to study there, and went on to complete his BA, MA and BSc. He also spent two years conducting research, which resulted in the invention of a revolutionary new kind of radio receiver. This invention was a major breakthrough in the field of radio technology, and it was a testament to Rutherford's ingenuity and dedication to his studies.

4. A Pioneer in Science

Ernest Rutherford was a trailblazer in the scientific community, becoming the first non-Cambridge graduate to be allowed to conduct research at the prestigious Cavendish Laboratory at Cambridge University. Under the guidance of the renowned Sir J.J. Thomson, Rutherford was able to make groundbreaking discoveries that would shape the future of science. His work at the Cavendish Laboratory was a major milestone in his career, and his legacy continues to inspire scientists today.

Also → Enrico Fermi: A Physicist Who Changed the World


5. The Father of Modern Submarine Detection

During the first World War, Ernest Rutherford worked on the practical problems of submarine detection. He was a renowned physicist and chemist who had already made significant contributions to the field of atomic structure, and his expertise was invaluable in the development of technology to detect submarines. His work was instrumental in helping the Allies to gain an advantage in the war, and his legacy lives on in the modern detection systems used today.

6. The Birth of Nuclear Energy

At McGill University in Canada, Ernest Rutherford and Frederick Soddy, a chemist, worked together to develop the 'Atomic Disintegration Theory', a comprehensive explanation of the results of their combined experiments. This theory was a major breakthrough in the field of atomic physics, and it was the first to suggest that atoms could be split into smaller particles. The theory was later used to explain the phenomenon of radioactive decay, and it laid the groundwork for the development of nuclear energy.

At Victoria University of Manchester, Ernest Rutherford and Thomas Royds conducted groundbreaking research into alpha radiation, ultimately proving that it was composed of helium ions. This discovery was a major breakthrough in the field of nuclear physics, and it helped to further Rutherford's reputation as one of the most influential scientists of the 20th century.

In 1908, Ernest Rutherford was awarded the Nobel Prize in Chemistry for his groundbreaking research into the disintegration of elements and the chemistry of radioactive substances. His discoveries revolutionized the field of nuclear physics and laid the foundation for the development of nuclear energy. His work also helped to explain the structure of the atom and the nature of radioactivity.

After receiving the Nobel Prize in 1908, Ernest Rutherford went on to perform his most famous experiment, the Geiger-Marsden experiment. This experiment demonstrated the nuclear nature of atoms, a revolutionary discovery that would go on to shape the field of atomic physics. Rutherford's experiment was a major breakthrough in the understanding of the structure of the atom, and it is still studied today.

10. Rutherfordium: The Element Named After a Nobel Prize-Winning Physicist

Ernest Rutherford, a Nobel Prize-winning physicist, is credited with the discovery of the element rutherfordium, Rf. This element was discovered in 1969 by a team of scientists at the Joint Institute for Nuclear Research in Dubna, Russia, and was named in honor of Rutherford's contributions to the field of nuclear physics. Rutherfordium is a synthetic element with an atomic number of 104, and is one of the few elements to be named after a person.


An English physicist who discovered the neutron.

Short about Ernest Rutherford
Was a New-Zealand born chemist and physicist.